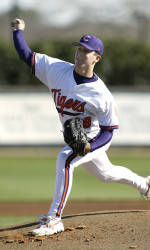 Clemson, SC – Former Clemson pitcher Jason Berken will make his Major League debut Tuesday night when he is the starting pitcher for the Baltimore Orioles against the Toronto Blue Jays in Baltimore. The game will start at 7:05 PM.

Berken will be the first member of Clemson’s 2006 team to reach the Major Leagues. That Tiger team finished fifth in the final polls with a 53-16 record and won the ACC Championship. Ten players off that Clemson team were drafted.

Berken will be the second former Tiger pitcher to make his Major League debut this year. Tony Sipp, who played at Clemson in 2004, made his debut with the Cleveland Indians on April 22 against Kansas City and set down the Royals in order in his one inning of work. Sipp has pitched in nine games this year.