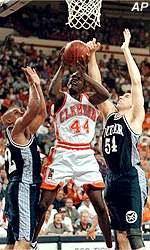 CLEMSON, SC – Former Clemson basketball player Tony Christie will graduate from Clemson University Saturday, August 10. The ceremonies will be held at the Brooks Center on the Clemson campus. Christie will receive his degree in Parks, Recreation, and Tourism Management.

“I would like to congratulate Tony Christie and his family for a tremendous effort and interest in fulfilling the #1 priority for all of our Men’s Basketball Players at Clemson University – earning a college degree!

“Tony had an opportunity to experience the highest level of basketball in the most competitive conference while becoming a member of the Clemson Community and the Clemson University family. I am confident he will contribute his talents to all of us in many ways as time moves on.

“Unfortunately, Tony will not be included as a positive statistic in the NCAA Graduation Rate Report for Clemson University, the Athletic Department, Coach Barnes or we who recruited him. However, I consider him far more of a success than a failure by virtue of not making his education into a race and taking his time to experience a professional basketball career along with completing his education.”