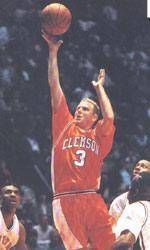 Clemson, SC – Bruce Martin, a former player and director of basketball operations at Clemson, has been named head coach and assistant athletic director for Davis & Elkins College, the Division II school announced. Martin, a native of Shady Spring, WV, will return to his home state and will be introduced at a formal press conference on Friday, June 5.

Martin lettered four years at Clemson from 1991-95. He averaged 5.8 points per game and played in 88 contests during his time with the program. Martin made 129 three-pointers as a shooting guard for the Tigers, and he ranks in the top 10 in school history with a 38.4 percent accuracy from three-point distance.

He went on to serve as Clemson’s graduate assistant for the 1998-99 season, before working as assistant athletic director for basketball operations from 1999-2003. As a graduate assistant, he helped the Tigers to a 20-win season and runner-up finish in the National Invitation Tournament.

Martin, who played as a graduate student after earning his degree from Clemson in 1994, was an assistant coach from 1995-97 at Francis Marion University in Florence, SC. In 1997-98, Martin served as a graduate manager under Larry Shyatt at the University of Wyoming. Martin then followed Shyatt to Clemson.

Following his time with the Tiger program, Martin has coached in various capacities. He was head coach of the Ockelbo Basketball Club in Sweden, one of the premier professional leagues in that country. He then returned to the U.S. as an assistant coach at Radford for 2006-07, followed by two seasons (2007-09) at Texas Pan-American.