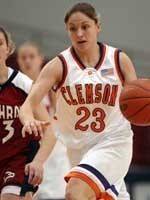 Vasilas played two seasons at Southern Wesleyan before transferring to Clemson for her final two years of eligibility. Vasilas was named the team’s Most Improved Player as a senior in 2002-03 when she averaged 3.9 points per game for Jim Davis’ squad. Last year, Vasilas served as an assistant coach at Southern Wesleyan.

“I really like the campus, the facilities and the people here,” Vasilas said of her new position. “This is a great opportunity. The camaraderie among the staff here is impressive, and I’m excited to be part of it.”

Vasilas graduated from Clemson in 2003 with a bachelor’s degree in Parks, Recreation, and Tourism Management.