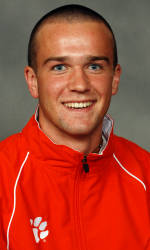 Clemson, SC – Former Clemson athlete Charles Allen and current freshman Matt Bruce will be battling for spots on the Canadian Olympic team this week at the country’s track & field trials in Windsor, Ontario. The trials are being held Thursday, July 3 through Sunday, July 6.

Allen will be competing in the 110m hurdles this week at the trials. He is scheduled for the semifinals Friday, July 4 at 7:20 PM. Should he advance to the final, it will be held Saturday at 4:20 PM. Allen owns a season-best time of 13.71 and was sixth place in the event at the 2004 Olympics.

Bruce recently completed his first season with the Tiger track & field program. The native of Oshawa, Ontario improved tremendously on his personal best in the 5K since the NCAA outdoor season concluded for Clemson. Bruce owns a personal best 14:26.20 and will run Thursday at 8:25 PM. He has international racing experience, having competed last summer at the Pan American Junior Championships in the 5000m.