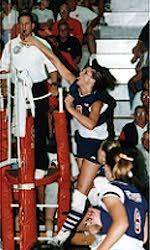 In December Stern became the Tiger volleyball program’s first All-American and the first AVCA All-American in the history of the ACC. The 1999 ACC Player of the Year, Stern holds the Clemson career block assist record of 448. She ranks second on Clemson’s all-time list with 1744 career kills and fourth with 163 career block solos. She also ranks third on Clemson’s all-time attempts list (3,965).

During the 1999 season Stern was honored as a member of the All-ACC first team and the ACC All-Tournament team. She was selected to the 1999 AVCA All-District III team and was named ACC Player of the Week five times during the regular season.

“I am really proud of Cindy,” said Clemson head coach Jolene Jordan Hoover. “I am excited for her to have this opportunity to play professionally and play after college. I’m also excited that a group has decided to form the league, because there have been few opportunities for volleyball players to continue their careers after college unless they go overseas or play with the national team. I’m very excited about the professional league and very excited that Cindy has an opportunity to be involved in it.”

After reviewing numerous tapes, extensive scouting and recommendations from volleyball professionals throughout the country, these top athletes were selected to join the “USPV Dream Team.” Each USPV player receives full health benefits and workman’s compensation in addition to a salary. With the addition of the new players, the USPV team now includes 14 former All-Americans, four who played internationally and 24 All-Conference volleyball players.

The USPV athletes train over 30 hours per week under the tutelage of legendary volleyball coach, Arie Selinger. The new recruits were added to enhance the current squad as they prepare for The Millennium Cup, an international round robin tournament taking place in three Midwestern cities and culminating in Chicago, IL on May 13, 2000 at the Allstate Arena. Each new athlete has completed her NCAA playing eligibility and will join the USPV’s training camp located outside Chicago. The eight new athletes are:

“These athletes represent the top college players in the U.S. and are critical as we prepare for the Millennium Cup in May 2000 and the launch of the league in January 2001,” said Arie Selinger, USPV Head Coach. “All these young women are committed to making a future for volleyball in this country,” he added.

Profiles on the new USPV team members are posted on the USPV website at www.uspv.com.

The USPV inaugural season is scheduled to begin January 2001 with six to ten teams in select cities throughout the Midwest. The USPV will operate as a single entity league with team operators. The season will run from January through April. To schedule media interviews please contact the USPV Front Office at (630) 787-9950 ext. 26.