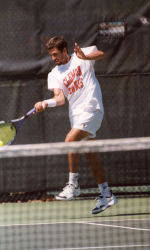 A Charleston, S.C., product, Goffi was named 2010 ITA Carolina Region Assistant Coach of the Year while serving as an assistant coach at Duke University.

Goffi joined the men’s tennis staff at Duke in July 2008. Prior to his two-year stint at Duke, Goffi was an assistant coach with the Arizona State women’s team for two seasons. He was named Wilson/ITA West Region Assistant Coach of the Year in 2008.

After completing a standout collegiate career at Clemson in 2001, Goffi played on the ATP Tour through September 2005. During that stretch, he claimed a pair of singles titles and 18 doubles championships. Ranked as high as No. 480 in the world in singles, he scored six wins over player ranked in the top 100. In doubles, his ranking peaked at No. 121 behind three wins over top-10 tandems. Goffi also represented Brazil in the 2004 Davis Cup.

As a three-time All-ACC selection for the Tigers, Goffi was the ACC’s singles and doubles champion in 1999 and was a member of the 2000 and 2001 NCAA All-Region teams. He rose as high as No. 9 in the singles national rankings and No. 3 in doubles while leading Clemson to three NCAA Tournament appearances and a spot in the 2001 ACC Tournament final.

Goffi graduated from Clemson in 2001 with a bachelor’s degree in financial management. He is married to the former Nancy Augustyniak, a former Clemson University women’s soccer player and also a professional soccer player who played for the Atlanta Beat. She also spent time in United States national team training camp in 2001 and 2002. Goffi’s father, Carlos, is an internationally recognized tennis coach who was named 1991 World Coach of the Year.