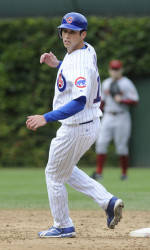 CLEMSON, SC – Six former Clemson baseball players have played in the Major Leagues this year. Here is a look at what they have done so far this year as we hit the All-Star break.

Tyler Colvin, in his first full year with the Chicago Cubs, has appeared in 80 games so far this season. On the year, he is batting .263 with 10 doubles, one triple, and 12 home runs with 32 RBI. The 12 homers lead all National League rookies in home runs and are tied for the MLB lead among rookies. Colvin’s .531 slugging percentage is also tops among NL rookies. Colvin, who has quickly became a fan favorite in Chicago, had his first career multi-homer game on July 4th against the Cincinnati Reds.

Jeff Baker, Colvin’s teammate on the Cubs, is hitting .239 in 43 games this season with five doubles, two triples, and three home runs with 12 RBI. Baker, who is a solid utility player at both second and third base, is in his second season with the Cubs and his sixth in the pros. For his career, Baker has appeared in 343 games and is batting .266 with 55 doubles, nine triples, and 29 home runs with 121 RBI.

Jason Berken, who is in his second year with the Baltimore Orioles, made the move to the bullpen this season after being called up to be the team’s fifth starter at the end of last season. This season Berken is 2-1 with a 1.95 ERA in 32 appearances. Over 50.2 innings pitched, he has 37 strikeouts against only 14 walks.

Tony Sipp, also in his second year with the Cleveland Indians, is a used as a situational left-hander out of the bullpen. This season Sipp is 1-2 with a 5.42 ERA in 38 appearances. In 31.0 innings pitched, he has 34 strikeouts. Over his two seasons in the majors, Sipp is 3-2 with a 4.06 ERA with 82 strikeouts over 71.0 innings pitched in 84 career appearances.

Two other former Tigers have made appearances in MLB games this season. Kris Benson made three starts for the Arizona Diamondbacks before straining his shoulder and going on the disabled list. In 14.0 innings pitched, he was 1-1 with a 5.14 ERA. In his five rehab starts for the AAA Reno Aces, Benson is 1-2 with an 11.02 ERA in 16.1 innings pitched but has not appeared in a game since June 8.

Steven Jackson also had a short stint with the Pittsburgh Pirates. In two appearances, Jackson was 0-1 with a 3.86 ERA in 2.1 innings pitched. Since returning to the AAA Indianapolis Indians, Jackson had made 25 appearances and is 1-0 with a 2.75 ERA in 36.0 innings.