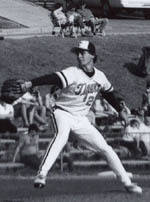 Former Clemson Pitcher Jimmy Key to be Inducted into ASHOF

BIRMINGHAM, AL – Former Clemson pitcher Jimmy Key to be one of ten inducted into the Alabama Sports Hall of Fame on Saturday, May 30.

A native of Huntsville, Key played collegiately at Clemson University from 1980-82 where he compiled a 20-14 record. He is the only baseball player in Clemson history to be first-team All-ACC at two positions in the same season, as a pitcher and designated hitter. He hit .325 during his three years at Clemson and hit 10 home runs.

Drafted in the third round of the ’82 draft by the Toronto Blue Jays, he made the team roster in `84. He set a club record for a rookie with ten saves. In ’87 his 2.76 ERA led the American League and his 17 wins tied a Blue Jays record for most wins in a season. He holds the most wins by a lefty in Blue Jays history (116). He is the only pitcher in the majors to win 12 games per season from ’85-94. In ’92 he helped the Blue Jays reach and win their first World Series, recording two wins against his childhood favorite team the Atlanta Braves.

To order tickets for the Saturday, May 30 Induction Banquet at the Birmingham Sheraton Hotel call the Alabama Sports Hall of Fame toll free at 877-323-6665.