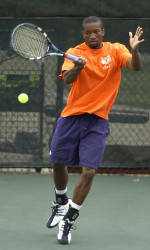 CLEMSON, SC – Former Clemson tennis standouts Ryan Young and Nathan Thompson are now continuing their tennis careers and are playing professionally. Young played for Clemson in 2004-07, while Thompson played in 2002-05. Both were All-ACC performers during their careers.

Recently, both players played in a tournament in Indonesia. In the third round of a qualifying event, Young upset #3 seed Devin Britton who was the 2009 NCAA Singles Tournament Winner and played for Mississippi. Ryan qualified for the main draw but lost in the first round of singles to Weerapat Doakmaiklee of Thailand, 6-4, 7-6.

Thompson advanced to the semifinals of the main draw as the number three seed. In the semifinal round, Dong-Whee Choi of Korea defeated Thompson 6-2, 7-5.

“We are very excited that Ryan and Nathan are continuing their success on the Pro Circuit in Futures Events,” said Clemson Head Men’s Tennis Coach Chuck McCuen. “Ryan got a great win in the last round of qualification over Britton who was the top player in the collegiate ranks last year, and is positioning himself very well to make a jump in the ATP rankings. Nathan had a solid performance by getting to the semifinals of the event. We wish them well in their upcoming tournaments, and are proud of what they continue to accomplish.”