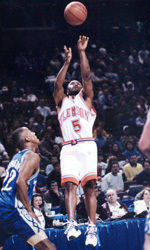 The 5-9 point guard led his team in the final game with 22 points, which included 4-of-6 three-point shots and 8-of-9 from the free throw line. Montepaschi Siena won 90-82 in the final game to celebrate the second Italian League title for the team. McIntyre averaged 17.0 points and 6.0 assists per game in the three-game sweep.

McIntyre led his squad to a 30-4 record during the regular season in the Italian A League, where he garnered MVP honors after averaging 13.5 points and 4.0 assists per game. He hit 40.4 percent of his three-point attempts over the course of the season as well.

The native of Fayetteville, NC concluded his career at Clemson as the school’s second-leading scorer with 1,839 points. He also ranks first in Tiger basketball history in career three-point goals (259) and second in career starts (112), free throws made (396), and steals (194).

McIntyre, who led the Tigers to three consecutive NCAA Tournament appearances from 1996-98, was recently announced as a member of Clemson’s 2007 Athletic Hall of Fame class.