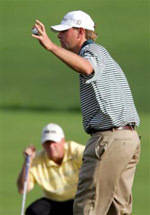 Former Clemson golfer Lucas Glover will compete in the 2006 Masters, which begins on Thursday in Augusta, GA . It will mark the fifth time in the last six years that a golfer with Clemson ties will compete in the event. Glover is the first former Tiger to compete in the Masters since Jonathan Byrd, who played in 2003 and 2004.

Glover will be in the first group to tee off on Thursday. He has an 8:00 AM tee time and is paired with Rod Pampling and Olin Browne. The same group has a 10:56 AM start on Friday. All tee times start from the first tee at the Masters unless poor weather conditions force a change in schedule.

Glover earned an invitation to the Masters by virtue of his top 40 finish on the PGA Tour money list in 2005. The native of Greenville, SC finished 30th last year when he made over $2 million. So far this year, Glover is 22nd on the money list with $909,374. He has already had four top 10 finishes in nine events, and he ranks third on the PGA Tour in top 10 finishes. He is also 22nd in scoring average at 70.45 and eighth in birdies per round with 130 in his 29 rounds. His top finish this year was a fourth place at the Buick Invitational.

This will be Glover’s third PGA Tour Major. He also played in the 2002 USA Open and the 2005 PGA. He missed the cut at both events. When he plays in the Masters he will become just the fourth former Tiger to play in the Masters, PGA and US Opens over his career. No former Clemson golfer has played in all four Majors.

Glover was a three-time All-American at Clemson, including a first-team selection in 2000 and 2001. He won three tournaments during his career and was a three-time South Carolina Amateur champion. He helped Clemson to a number-two NCAA finish as a freshman and as a senior.

Four former Tigers have made the cut at the Masters. Jonathan Byrd had the top finish among former Tigers with an eighth-place finish in 2003.

Pruitt had a 68 in the second round in the 1992 Masters and a 69 in the final round that same year for the top two rounds for a former Tiger at the Masters. His 282 score is also the top tournament by a former Clemson golfer. Byrd finished eighth at the 2003 Masters, the only top 10 by a former Tiger in any Major.

D.J. Trahan are the only Tiger golfers to play in the Masters while they were still members of the Clemson golf team.