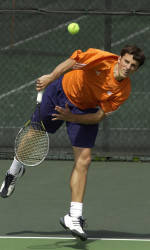 Last week former Tiger star nearly qualified for his first ATP level tournament in LA, California. During the qualifying rounds Reix defeated Aaron Yovan of the US #1389 ATP and followed this up with one of the best wins of his career over Marinko Matosevic of Bosnia-Herzegovina ranked #152 ATP. In the qualifying round Rex fell to one of the hottest players on the Challenger tour in Laurynas Grigelis from Lithuania.

This week, Reix is competing in the Odlum Brown Vancouver Open Challenger Event. Reix is currently in the quarterfinal round facing Bobby Reynolds of the US who has a career high ATP ranking of #63. On his way to the quarterfinals Reix defeated Adam El Mihdawy of the US currently ranked #376 ATP and the #7 seed in the tournament Fritz Wolmarans from South Africa currently ranked #219 ATP. Both of these matches came down to the third set and verse Wolmarans the match was decided in a third set tiebreak, with Reix squeaking it out 11-9.

“Clement is focused and determined right now as he prepares for the US Open qualifying,” said Clemson Head Coach Chuck McCuen. “Picking up that win last week against Marinko was huge for his confidence, and the two wins this week against Adam and Fritz will help him to continue his rise in the rankings. There are no easy matches at the level he is playing, and he is showing a lot of confidence in the late stages of these matches. We are excited about his progress and wish him the best of luck verse Bobby tonight in Canada.”