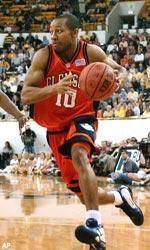 Scott, a native of Eastover, SC, was not present for the ceremony as he is preparing for another professional basketball season overseas. He competed in Australia last year.