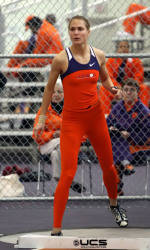 Clemson, SC – Clemson athletes Jacoby Ford and Liane Weber earned regional honors for their performance this indoor season, according to the U.S. Track & Field and Cross Country Coaches’ Association (USTFCCCA). Ford was cited as the male Track Athlete-of-the-Year, while Weber was named female Field Athlete-of-the-Year in the Southeast Region.

Ford is the nation’s leader in the 60m dash this season, having clocked a time of 6.51 en route to winning an ACC championship in the event late last month. Ford’s time is also an ACC record, eclipsing his previous record of 6.52 at the 2007 league meet. Ford also was an NCAA provisional qualifier in the 200m dash this year. He will compete this weekend in the 60m dash at the national indoor meet in College Station, TX.

It marks the second USTFCCCA regional honor in Ford’s career. He was also named the region’s Track Athlete-of-the-Year in 2007 as a freshman.

Weber enters this weekend’s national meet as one of the favorites in the pentathlon. She totaled 4,218 points at the ACC Championships after winning her second crown in the event in three years in the league. Weber, a big reason Clemson has been ranked as high as #10 nationally in women’s track & field this season, is competing in her second NCAA national indoor meet today.