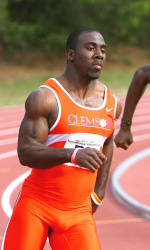 Clemson, SC – Clemson took the top four spots in the men’s 100m dash Saturday to highlight the final day of action at the Orange & Purple Classic. All four sprinters recorded personal bests and regional-qualifying times, led by C.J. Spiller (10.22) was runner-up, followed by Justin Murdock (10.30) and Trenton Guy (10.34). The times were recorded with an NCAA-legal wind reading of +2.3 meters per second.

Ford’s time is the fastest recorded in the 100m dash so far in the 2009 season. Trindon Holliday, who finished runner-up to Ford in the indoor 60m dash at nationals, had previously run a 10.12 for LSU on April 4. Ford’s time also ranks fourth-best in Clemson history, behind only three former Olympians in Michael Green (10.01), and James Trapp (10.03).

Spiller’s time in the 100m dash was a personal best, as his previous best was 10.29 last season at the NCAA East Region Championships. Spiller now ranks in a tie for 10th on the Tigers’ all-time performance list with former two-sport standout Airese Currie. Murdock and Guy also produced personal bests in the event. Murdock’s previous best this season was 10.75 at the ACC Championships, while Guy had previously run as fast as 10.51 in the event.

Ford was scratched from the 200m dash, and Spiller took advantage by claiming first place in the event. He had a personal best after clocking a 20.91 with a legal tailwind. Murdock concluded his outstanding meet with a personal best and NCAA East Region qualifying time of 21.02 in the 200m, finishing in third place. Guy was sixth with a time of 21.28.

In the 4x100m relay, Clemson easily finished in first place with a time of 39.45 seconds. The team consisted of Murdock, Ford, Guy, and Spiller. The middle legs propelled the Tigers into the lead, then after a bit of a slow final exchange, Spiller brought it home for the Tigers. In total, Clemson had eight regional-qualifying performances from the men’s sprint group on Saturday.

Kristine Scott was third in the women’s 100m dash. She posted a time of 11.72 as Clemson’s lone entry in the event. She also competed in the 200m dash, where she placed runner-up with a time of 23.80.

Miller Moss was Clemson’s only competitor in the high hurdles. The Sumter, SC athlete posted a personal best time of 15.06, six tenths better than his previous best from last season.

Alex Padgett was unquestionably the biggest bright spot for the Tiger field event athletes on Saturday. Already a regional qualifier in the hammer throw, he added a second event for this season in the shot put after winning with a personal best of 56’10”. He jumped from 10th on the school’s all-time performance list to fifth with his monumental effort. Padgett was the state of South Carolina champion in the shot put as a high school senior in 2006.

Kathleen Majester won the pole vault in a jump-off. Four student-athletes, including three from Clemson, cleared 12’1.5″. Majester was the only one able to clear 12’3.5″, therefore claiming the title. Emily Barlage was second, while school outdoor record-holder Caroline Kennedy placed third. Majester’s clearance puts her in sole possession of fifth place in the Clemson record books for the outdoor pole vault.

Linda Buchholz was runner-up in the javelin throw. The junior from Bad Segeberg, Germany posted a throw of 138’5″ in the finals. Buchholz shined later in the afternoon in the high jump, where she recorded an outdoor personal best. She won the event with a clearance of 5’8.75″, which qualifies her for the NCAA East Region Championships later this month. Her clearance ranks in a tie for second on the school’s all-time performance list. She is now a regional qualifier in both the javelin and high jump.

The men’s javelin was supposed to feature a pair of Tigers, but Scott Pauga was scratched and Moss was guilty of three fouls in the preliminary round. Stephen White finished sixth in the discus with a throw of 151’5″, while Moss was 11th with a top mark of 133’8″.

The Tigers return to action next weekend in Atlanta, GA. Clemson will be sending most of its team to the Georgia Tech Invitational, while Moss is slated to compete in the decathlon in a meet at Wake Forest.