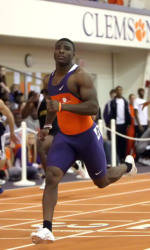 Clemson, SC – Jacoby Ford and April Sinkler of the Clemson track & field team have been honored by the ACC as Performers-of-the-Week, the league office announced Tuesday.

Ford won the 60m dash over the weekend at the Clemson Invitational and did so with an automatic qualifying time for the NCAA Indoor Championships. He ran a 6.59 in the final and finished ahead of teammates Trenton Guy and Justin Murdock. Ford, the ACC’s record-holder in the event, was named Co-Performer-of-the-Week along with Jerome Miller of Georgia Tech.

Sinkler won two event titles at the Clemson Invitational and posted NCAA provisional qualifying marks in both. She won the long jump Friday with a personal best mark of 20’0.5″, a leap that ranks sixth-best in school history. On Saturday, Sinkler claimed the high jump after clearing a school-record 5’10”.