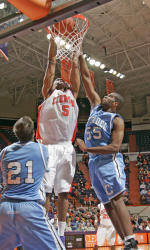 Everyone is born to fulfill his or her own destiny. Some people acquire interests in particular areas and work towards those goals; others are simply born with natural talents that guide them down certain paths. Clemson’s senior center Sharrod Ford’s destiny has always led him to the basketball court.

As a child, Ford’s physical stature always put him on the court, as he was the tallest kid in the classroom. “Everyone pushed me towards playing the game,” says Ford.

Although Ford has had the physical build for a basketball player and has played for most of his life, his skills did not begin to shine until shortly before his junior year in high school. Ford became a member of the Gwynn Park High School basketball team during his freshman year but he did not yet have the talent to have an impact on the team. “A lot of guys were jealous saying that I had only made the team because I was tall,” says Ford. “I used to take offense to those comments but I’m here [Clemson] now, so everything is good.”

The criticisms that Ford received are what drove him to become a better player. During his senior year at Gwynn Park High, Ford averaged nearly 16 points and 12 rebounds per game and helped lead the team to the state championship game. That championship game turned out to be a huge upset for Ford and his teammates, and is one that Ford remembers the most, even if it is not one of his better memories.

“There were 20 seconds left in the game and we were tied. I got the ball but missed the shot. The other team came down the court and got the winning basket. After that game, I was crying my eyes out! I was so hurt because it was my last game,” says Ford.

Ford has definitely evolved as a stronger player since those high school years. Basketball is now a focal point in Ford’s life although as he thinks back to the first two years of high school, being a star athlete was nothing that he expected. “I didn’t think that basketball would have taken me this far. Back then, it was just something for me to do.”

But Ford has allowed basketball to become more than just a leisure activity. It has led him from his hometown of Suitland, MD, to be one of the key components of the Clemson basketball program. What he has accomplished this year will have a lasting impression on the program as Oliver Purnell strives to bring Clemson to uncharted heights on the hard court.

Ford performed at his best this season when the Tigers faced his home state team, the University of Maryland. The game at College Park on Feb. 22 was the best of his career statistically, and the most satisfying of his career. He scored 24 points on 9-13 shooting from the field, added 10 rebounds and nine blocked shots.

The blocked shot total was the most in Clemson history on the road and it was just one block from a triple double. He had a block that was called a goal tend in the last minute of play. Had the call not gone against him, he would have joined Sharone Wright and Tree Rollins as the only players in Clemson history to record a “Triple Double”.

“That was probably the best game that I ever played. But, the team just played so well together and that allowed me to have a great game; if we played like that all of the time, the sky is the limit for us.”

On the rare occasions that Ford does not have a good game, he makes a few minor adjustments to assure that one bad game does not become a repetitive occurrence. As a result, he has scored in double figures in all but five games all season, including just two games out of double figures in conference play.

While he works on the aspects of the game that need improving, he also is a little superstitious. “If I have a bad game and I was wearing a certain pair of shoes, I try not to wear those anymore,” says Ford. “Or if I get a haircut the day of the game, I will make sure that I get one the day before next game.”

Just as the last two years at Gwynn Park were the highlight of his high school career, these past two seasons under the leadership of Coach Oliver Purnell have tremendously helped Ford to enhance his game. “Coach Purnell has done a lot for me and my career. He chooses to give me the ball right away, and is always going inside,” says Ford. “I have a lot of respect for him and want to do well.”

Ford has become a strong leader for the Tigers and he knows that he will always have the support of his teammates, coaches and family. “My parents have always been my biggest influences. My father played college ball and my mother is a strong supporter even though she doesn’t know much about the game,” says Ford with a smile. “My dad comes to the weekend games and my mom is at every game. It means a lot to me and their support as been very important throughout my career.

Ford’s mother, Wendy McDowell, allows nothing to keep her from being in attendance in Littlejohn Coliseum or any away games. “It’s a normal thing for me to be at his games. My kids need me to be there for them,” says McDowell. McDowell wears a Sharrod Ford’s jersey to every Clemson game.

The nine-hour drive that McDowell makes to be in Clemson is nothing more than a quick road trip for her. Weather conditions can sometimes be a concern during the winter, but her outstanding time maintenance allows her to be in the stands for nearly every game.

“There was one time that I had some car trouble so I rented a car and made it to Clemson and was in my seat one minute and five seconds before tip-off! It’s a must that I am at the game before tip-off,” says McDowell.

McDowell even pursued a career that would allow her the ability to travel so frequently. As a real estate agent, McDowell says that she travels with her client’s information and gets help from co-workers to show her property when she is away. “My clients may call while I’m at one of the games, and I just let them know that my son plays for Clemson and they usually understand,” says McDowell.

When McDowell can not make it to one of Ford’s games, she makes sure that she is able to watch him play on television. “One night, I was watching a game and I was so loud that I’m surprised that my neighbors did not call the police!,” laughs McDowell. Even if Ford becomes a professional player, McDowell gives all assurance that she will let nothing stop her from supporting her son as much as possible. “Wherever he will be, I will be right there. Wild horses can’t keep me away,” says McDowell.

While Ford may have nightmares about his final high school game, that won’t be the case when it comes to his final regular season game at Littlejohn Coliseum. With the score tied against Virginia Tech, he raced down court after a Shawan Robinson steal, took a pass from Robinson and dunked the ball at the buzzer to give Clemson the victory and the necessary 15 wins to qualify for postseason play.

“I will always remember my last game, my last play,” said Ford. “I never thought I would be in that situation. ” Clemson students raced on the court immediately after the score to celebrate one of the most memorable moments in Clemson basketball history.

“Sharrod Ford’s has had an All-ACC season for us,” said Purnell, who has coached Ford the last two seasons. “He has put up consistent, outstanding numbers, but he has been a very good leader for us. It is never easy to adapt to a new system, but he has adapted and been outstanding in every area. We will miss him next year no doubt as he moves on to the next level. He should take pride in the contributions he has made to this program.”