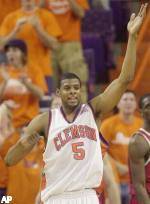 Former Clemson basketball players Sharrod Ford and Akin Akingbala competed at the 2006 Toshiba Vegas Summer League from July 6-14. Both players competed under current Clemson head coach Oliver Purnell, and both are hoping to land a spot on an NBA roster for the 2006-07 season.

Ford was solid for the Cleveland Cavaliers in summer league action. He averaged 12.4 points and 7.6 rebounds per game. His rebound average ranked seventh among all players in the league. He also shot 56.8 percent from the field and averaged 1.4 blocks per game. In Cleveland’s final game on Friday, he recorded a double-double with 16 points and 10 rebounds against the Toronto Raptors.

Akingbala played in three out of five games for the Boston Celtics. His most extensive action came Friday in their final game against Detroit. He played 24 minutes and scored 10 points and hauled down eight rebounds. He shot 8-8 on free throws in 39 minutes of play for Boston’s summer league team.