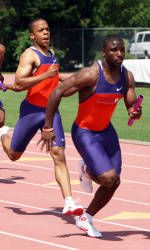 Greensboro, NC – Clemson received some strong performances from its sprint group, namely the men’s 4x100m relay, Friday to lead the Tiger track & field program on day one at the NCAA East Region Championships. The meet is being held at the Irwin Belk Track Facility on the North Carolina A&T campus.

Jacoby Ford and Justin Murdock both advanced to Saturday’s final of the 100m dash. Ford turned in the top time of the preliminary round, clocking a 10.21 into a slight headwind. Ford hopes to become the second winner of the event in as many years for Clemson. Travis Padgett won the 100m dash last season.

Murdock, who was one of three freshmen to qualify for the final, posted a time of 10.38 and qualified as one of the fastest times of the non-heat winners.

C.J. Spiller and Trenton Guy ran well, but both just missed qualifying for the final in the short sprint. Spiller posted a time of 10.46, but was edged by two-hundredths of a second by hometown favorite Caleso Newman of North Carolina A&T. Guy ran a 10.55 and was 13th in the field of 32 sprinters.

The 4x100m relay team was outstanding in the prelims. Clemson won the third heat with a season-best time of 39.03, also the fourth-fastest time in school history for the event. The Tigers had the top time of the preliminary round and will be joined in Saturday’s final by the other two favorites in the East Region, Florida and Florida State. The Tigers’ 4×1 lineup Friday was comprised of Murdock, Ford, Guy, and Spiller.

Kristine Scott, the lone women’s sprinter to qualify for regionals, competed in the 200m dash Friday but did not advance. She placed 10th overall with a time of 23.85 in her first-ever appearance. Also a 100m qualifier, she was not entered in that event for Clemson.

In his final appearance in a Clemson uniform, senior George Fields jumped 23’4.5″ to place 16th in the long jump. Fields was a two-time All-East Region performer during his career with the Tigers.

In the women’s pole vault, both Kat Majester cleared 12’6″. Kennedy was judged to have finished in 10th place, while Majester tied for 17th in her first-ever appearance at the regional meet.

Alex Padgett competed in the shot put Friday, but fouled on all three of his attempts. He will have a chance to redeem himself Saturday, as he is slated for the hammer throw.

The team returns to action for the final day at the NCAA East Regional on Saturday. Linda Buchholz and Alex Padgett will compete in the women’s javelin and men’s hammer throws, respectively, at 11 AM. Buchholz will also compete in the high jump, while Josh Fowler is slated for the men’s triple jump.