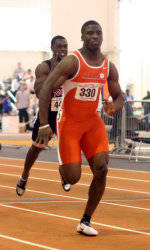 Ford #1 in Latest ‘Dandy Dozen’ According to Trackwire

Clemson freshman Jacoby Ford is listed as #1 in the latest ‘Dandy Dozen’ calculations, according to Trackwire. The rankings include the projected top 12 athletes broken down by event. Ford is ranked at the top of the 60m dash listings.

The native of Royal Palm Beach, FL posted an ACC record time last weekend after winning the 60m dash in 6.52 seconds. He easily claimed the 2007 league title in that event against the nation’s strongest field. Five members of this week’s ‘Dandy Dozen’ participated in that final. He also earned All-ACC honors in the 200m with a third-place finish.

Ford’s next competition will come at the NCAA Indoor Championships in Fayetteville, AR on March 9-10. He previously won the 60m title this season at the Tyson Invitational, held at the same track that will serve as host to the national meet.

Four other Tigers are ranked in this week’s ‘Dandy Dozen’ calculations. Itay Magidi is 12th in the 3000m chart. In the pole vault, All-ACC honoree Ryan Koontz has returned to the top 12 for the heptathlon after breaking the school record with 5,531 points last weekend at the ACC meet.