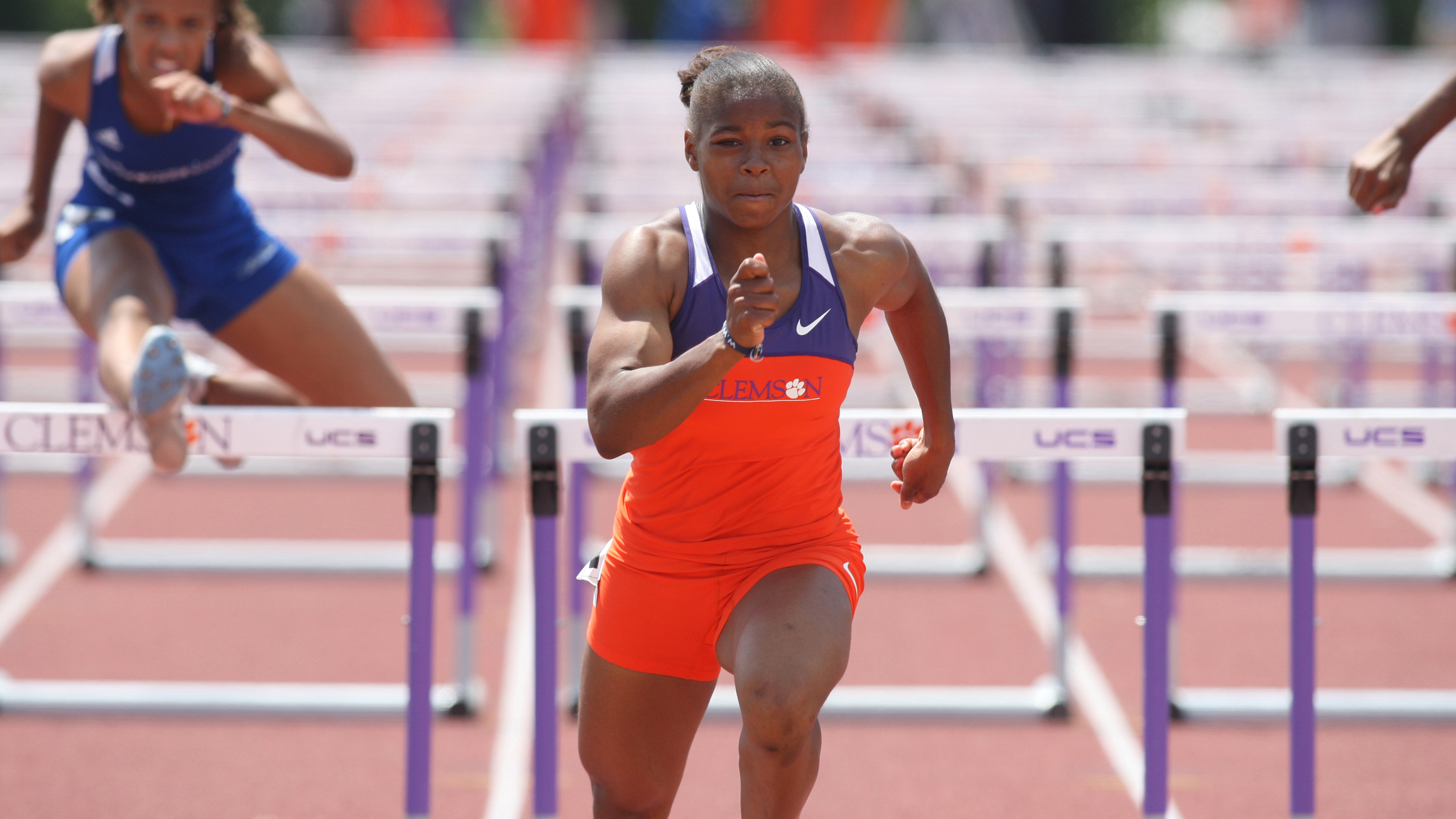 Clemson enters the 2013-14 season winners of eight consecutive ACC Championships as a women’s track & field team.  In its most-recent triumph, several athletes and performances made the slightest difference in bolstering Clemson to its narrow five-point victory over Florida State.

Whitney Fountain‘s performance against the odds may have been the one that flew under the radar the most in providing the Tigers the decisive outcome.

“The heptathlon was all heart,” said the Bronx, NY native.  “I was hurt during warmups at the ACC Indoor Championships and didn’t practice much for the heptathlon.  I threw the javelin a couple of times and did some high jump.  But I didn’t really run at practice, never did the hurdles, and did not touch the long jump.

“That was hard for me to win that championship.”

To overstate the sheer significance of Fountain’s effort, which produced a crucial 10 points for Clemson, would be difficult given her background in track & field.  A sprinter and jumper by trade, Fountain enrolled in the fall of 2010 with the impression she would continue to shine in those individual events.

That was not exactly the case, as she soon found out.  She was quickly notified that she would be trained in the multi-events, reserved for athletes of high caliber who excel in a number of areas.

There was only one problem, though.  Fountain had no interest in the multi-events.

“I didn’t want to do the heptathlon…I never wanted to,” admitted Fountain.  “At the same time, I’m thankful to have competed in it, because it was a good experience and taught me a lot of diversity.”

With the announcement of Louisiana State Associate Head Coach Mark Elliott as Clemson’s new head coach this summer, she made her mind up to approach the new staff with a straightforward request.

“I asked the coaches if I could do the sprints and jumps that I came for in the first place.  They were confused…they didn’t know I didn’t want to do the multis.”

Elliott and his staff obliged, and Fountain could not be more excited to return to her natural areas, primarily the short sprints.

With the loss of the team’s top sprinters, Dezerea Bryant, Stormy Kendrick, and Jasmine Edgerson, a void has been left and a leadership position is up for grabs.  Fountain believes that position is hers to lose.  With her prep career credentials, it is hard to argue her belief.

Fountain was the National Scholastic Indoor Championship runnerup in both the 55m and 200m.  On top of that, she was the silver medalist at the 2009 USA Junior Olympics in the 400m hurdles.

“I know I can be better than I was in high school.  I’m ready to unleash that!”

Part of her readiness stems from the confidence that has been instilled from the new coaches in a short time period.  Elliott and his assistant coaches have Fountain believing that the Tigers can not only continue their reign atop the ACC, but also ascend even higher in the national rankings.

“His (Elliott’s) demeanor is so positive,” said Fountain, who is on pace to earn a sociology degree in December.  “He believes we can be national champions if we work hard.  I felt him speaking to me during our first meeting.  That stuck with me and encouraged me as well.

“We want to defend our ACC titles.  We don’t want to be the first group to lose it, especially with the ACC Indoor Championships being at home.”

With student-athletes such as Fountain buying into Elliott’s system, the Tigers may again prove to be tougher than the competition.