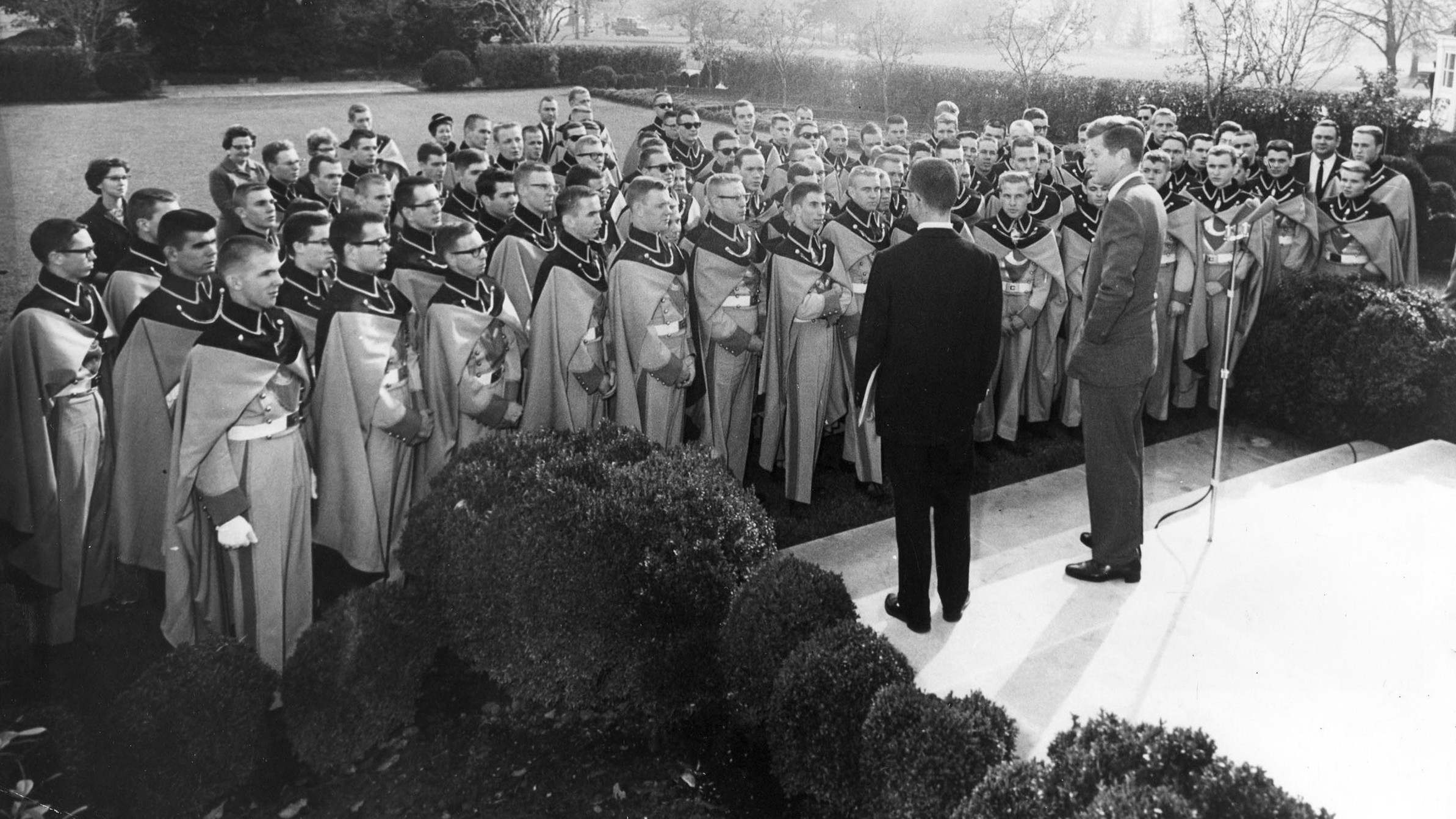 Two buses transporting 60 Clemson football players, 20 coaches, administrators, and student managers pulled out of the parking lot at Fike Fieldhouse just after noon on November 22, 1963. It would be a three-hour ride to Batesburg, SC, the road headquarters for the Tigers during the era when Clemson played South Carolina in Columbia.

Head Athletic Trainer Fred Hoover and Line Coach Bob Smith were riding together in the front seat of the first bus.

“We went through a lot of little towns to get to Batesburg,” said Hoover, then in his sixth season of a 40-year career. “It was a much longer ride in those days, because I-26 had not been built yet.

“We were riding through Saluda, and as we passed the post office, Bob noticed that the American flag in front of the building was at half-staff. We thought that was odd, because it took a major event for that to happen.”

Something major had in fact taken place. At 12:30 PM (central time), President John F. Kennedy had been shot at Dealey Plaza in Dallas, TX while riding in an open-car motorcade. He was pronounced dead at Parkland Hospital at 1:00 PM, and 33 minutes later, a press conference was held to tell the world.

“We obviously didn’t have cell phones in those days, and I don’t even know if the bus had a radio,” said Hoover.

The team continued its trip and arrived at the hotel in Batesburg at 3:00 PM.

“None of us knew of the assassination until we got off the bus and someone from the hotel staff told us.”

Similar to the events of September 11, 2001, it took a while for the gravity of the situation to sink in within the sports world. (Clemson and most other college football teams practiced on the afternoon of September 11, 2001 after the Twin Towers were attacked, and games for the next weekend were not postponed until the next day.)

“We didn’t know if the game would go on or not,” recalled Hoover, who still helps out at Clemson home football games as a liaison between the football office and Tiger opponents. “We had a practice scheduled at a local high school, so we went ahead and did the workout.”

However, it was not much of a practice.

“We were up for the game, but after our boys heard of the president’s death, things started to happen,” said Head Coach Frank Howard in an interview with Jake Penland of The State the next day. “There were busted signals with two boys running together…things like that. They didn’t have their mind on football.”

When the team returned from practice to the hotel, the game had not been cancelled. In fact, Clemson President Robert C. Edwards and South Carolina President Thomas F. Jones had released a joint statement saying the game would go on as scheduled.

In retrospect, some in the media of the era speculated that the game was not postponed immediately because CBS was planning to televise the Saturday afternoon contest on a regional basis.

It was to be just the second regular-season game televised in Clemson history, and it was to be shown on 50 CBS affiliates in 11 states. Each school was to be paid $53,000 for the appearance. Some believed CBS had an influence on the two university presidents.

So, the Clemson team had dinner at the hotel and monitored television coverage provided by Walter Cronkite on CBS.

The television coverage was dramatic and speculation had the country wondering if the United States was going to be attacked by a foreign country. Remember, we were just 18 years removed from World War II.

N.C. State and Wake Forest were actually scheduled to play a game Friday night, and that game went on. But as the evening continued, more and more schools announced postponements or cancellations.

At 9:30 PM, Howard received a call from Dr. Edwards, who informed him the game would be postponed until the following Thursday, Thanksgiving Day.

At 10:00 PM, Clemson and South Carolina released a joint statement.

The Clemson vs. South Carolina football game scheduled for November 23, 1963 has been postponed due to the death of President John F. Kennedy. We regret any inconvenience that may be caused to individual fans, but we feel this action is in accord with the solemnity of the hour.

Coach Howard called the players together, and one of the players suggested the team return to Clemson that night and practice on Saturday. Howard agreed and the team was back on the road to Clemson by 10:30 PM.

The teams played in relative anonymity the following Thursday, as the game was not televised on CBS. A Detroit Lion game had priority. The Tigers defeated the Dan Reeves-led Gamecocks by a score of 24-20 thanks in part to a touchdown by Howard’s son, Jimmy.

Similar to the way sports helped heal the country after September 11, 2001, the games helped put the nation on the path to healing in 1963.