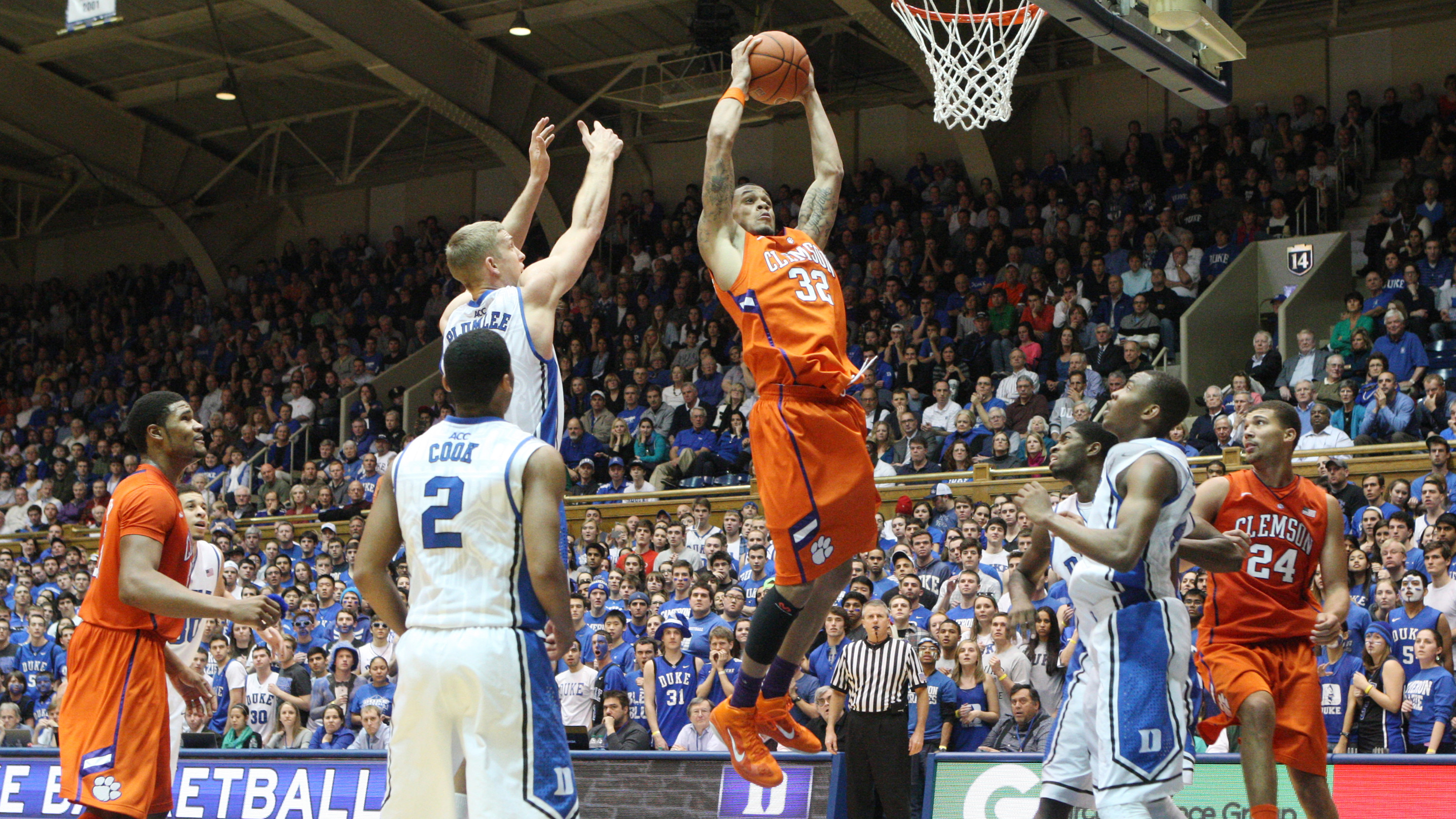 K.J. McDaniels is not sure where his natural jumping ability comes from, but he admits to spending countless hours as a young boy watching highlights of Michael Jordan, Scottie Pippen, and Dominique Wilkins.

“I watched a lot of NBA highlights, and it looked so fun,” said McDaniels. “It brings a lot of energy to the game, and it motivated me to work harder and pretend to be like those guys.” There is no need for pretending anymore, as Clemson’s starting small forward has carved his own niche as one of college basketball’s most exciting players. Whether he is blocking a seven-footer from Florida State at the rim or dunking over and landing on a Wake Forest player, McDaniels stands out on the hardwood.

Quick feet and timely jumping have come naturally to Clemson’s high-flyer, but the next challenge in his development as a player has been to become more well-rounded. Head Coach Brad Brownell has acknowledged the vast improvement within McDaniels’ skill-set since he first set foot on campus in 2011.

“The next step is to be able to put the ball on the floor, draw help, and find his teammates,” stated Brownell. “He’s trying to attack it, so we’re excited about his development and believe he will have a really good season for us.”

McDaniels has provided plenty of statistical evidence for Brownell’s belief. In 2012-13, he more than doubled his scoring average from the previous season and was the team’s second-leading scorer (10.9). He blocked 58 shots and led the ACC with 2.1 per game. He also showed an ability to attack the glass, finishing second on the squad with 50 offensive rebounds.

While McDaniels acknowledges that the highlight plays make him stand out on the court, he believes his greatest growth as a player through two seasons has been defensively.

“I’m starting to take more pride in that, because that can win you games,” explained McDaniels. “I still have room to improve, but my defense has been much better.”

McDaniels has made it clear he wants to erase the struggles of his first two seasons at Clemson, saying he wants “to put a banner up there” (in the Littlejohn Coliseum rafters). In order to do that, he will be asked to provide leadership to a team with no seniors. It marks the first time since 1995-96, the second season of the Rick Barnes era, that the Tigers have not had any seniors.

The team is closer in age than any Tiger squad in recent memory, and the camaraderie that comes with that was evident in August when Clemson traveled to Italy for a four-game exhibition tour.

“It starts off the court,” continued McDaniels. “We feel more comfortable talking to each other. We try to spend more time together outside of basketball, so when we say something on the court, you know not to take it personally.”

On the court, McDaniels averaged 15 points and 9.3 rebounds per game in the four games in Italy, all Tigers victories. He added 12 blocks and five steals.

The trip to Italy was not McDaniels’ only personal highlight this summer. He also earned invitations to a pair of prestigious elite youth basketball camps run by NBA superstars Kevin Durant and LeBron James. He was one of only a few select college players to earn invitations, a clear sign McDaniels’ star is on the rise.

His star has steadily been rising since he first realized his desire to play basketball at the next level, which he said was ingrained during his sophomore year of high school. His father, Kevin, played college basketball at South Alabama, so it was always in his blood. But he first attempted to play soccer and football before realizing his true calling.

“At my first soccer practice, I just stopped,” he laughed. “I didn’t realize how big the field was.”

Indeed, McDaniels seems at home on a playing surface that measures 50 feet wide by 94 feet long. After all, the basketball court is the best place for him to spend his time emulating the players he grew up idolizing.

Who knows…one day, similar young basketball fans may pretend to pull off some of McDaniels’ highlights.