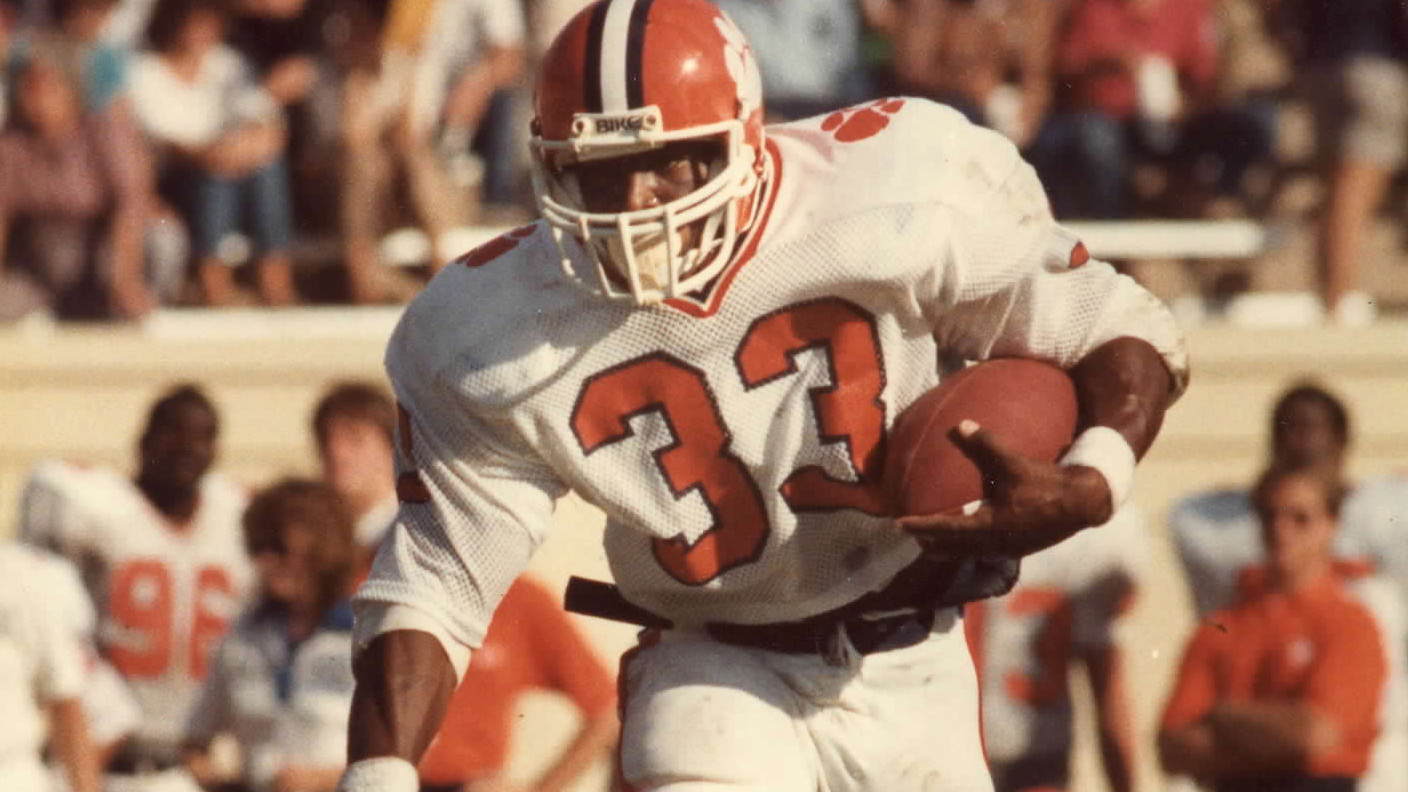 A 10-person class that features five All-Americans, two National Champions, three ACC 50-Year Anniversary team members, a two-time ACC Coach of the Year, and one of the school’s best two-sport athletes will be inducted into the Clemson Athletic Hall of Fame October 11-12.

Brentson BucknerFootball • 1990-93 Former Clemson All-ACC defensive tackle Brentson Buckner played for the Tigers from 1990-93. He was a three-year starter and four-year letterman. He started as a member of the 1991 ACC Championship team that led the nation in rushing defense, and also started in 1992 and 1993. The 1993 team won nine games and was ranked in the final top-25 poll.

As a junior in 1992, Buckner had 85 tackles, then totaled 84 tackles as a senior when he was named defensive MVP in the 1993 Peach Bowl after recording 13 tackles in Clemson’s 14-13 victory over Kentucky. It was his final game as a Tiger.

Clemson was ranked in the top 25 for three years while Buckner was a Tiger. Clemson reached #9 in the country in 1990, the school’s highest ranking during Buckner’s career and the last top-10 finish before the Tigers were ranked #9 in 2012.

The Pittsburgh Steelers selected him #50 overall in the second round of the 1994 NFL draft. He played 12 seasons at the professional level, including five seasons with the Carolina Panthers. Buckner made two Super Bowl appearances, one with Pittsburgh and one with Carolina.

After retiring from the NFL in 2005, Buckner went on to coach football at Northside Christian Academy in Charlotte, NC. He was named the head coach of the Charlotte Speed of the Indoor Football League in 2012. This experience served him well, as he is now the defensive line coach for the Arizona Cardinals.

Michelle BurgherWomen’s Track & Field • 1999-01 Jamaican native Michelle Burgher was a dominant force for Clemson’s track & field program. She entered Clemson in August of 1999 as a transfer from George Mason. She competed in many international meets, including the 1995 Pan American Junior Games in Chile and World Junior Games in Australia.

She gained fame by winning a silver medal in the 2000 Olympic games in the 4x400m relay and later earned a bronze medal for Jamaica in the 2004 Olympic games.

In the 2001 ACC Outdoor Championship, Burgher earned first-place honors in the 4x100m and 4x400m relays, and also won the 4x400m relay in the indoor championships that year. In addition to all of her relay and sprinting events, Burgher also claimed the ACC outdoor championship in the 400m hurdles.

The five-time All-American still holds the third-fastest 400m time in Clemson history. After receiving her degree in psychology, Burgher continued to run professionally and for the Jamaican National Team. She is currently the track & field head coach at Indiana (PA).

Cliff EllisMen’s Basketball Coach • 1984-94 Cliff Ellis was the Clemson men’s basketball head coach from 1984-94. In his 10 seasons as head coach, he led Clemson to eight postseason appearances, three NCAA Tournaments, and five NIT berths. Prior to his arrival at Clemson, the Tigers had only been to five postseason tournaments.

Ellis was the first coach in history to lead an ACC school to postseason play in each of his first six years with a program. In the 1989-90 season, he coached the Tigers to the first regular-season ACC title in the program’s 80-year history. In that same season, Clemson finished the regular season with 10+ ACC wins for only the second time in Tiger history. For the second time ever, Clemson defeated every ACC team during the course of the season.

Ellis was a two-time recipient of the ACC Coach-of-the-Year award, which he received in 1986-87 and 1989-90. He is still the only Clemson basketball coach to receive that honor. Under Ellis, the Tigers had two top-15 finishes. Ellis’ 1986-87 team set a school record with 25 victories. It was one of his 33 coaching records earned during his tenure at Clemson.

His teams recorded 22 victories over top-25 opponents. One of the biggest wins for Ellis came on February 28, 1990, when Clemson upset Duke by a score of 97-93 to clinch the ACC regular-season title.

Ellis finished his career with the Tigers as the winningest coach in Clemson history with 177 victories, a record he still owns. After his time at Clemson, Ellis went on to coach at Auburn for 10 seasons and was the national coach-of-the-year in 1998-99. Ellis is currently the head coach at Coastal Carolina.

Terrence FlaglerFootball • 1982-86 A first-team All-America running back in the 1986 season, Terrence Flagler played football for Clemson over a five-year period from 1982-86. He did not see much playing time during his first few seasons with the Tigers due to a knee injury that he suffered early in his freshman campaign.

But in his senior season in 1986, Flagler was the runner-up as the ACC Player-of-the-Year. He was 13th in the nation in rushing with 1,258 yards and was among the national leaders in yards per carry (6.6). His 1,258 rushing yards in 1986 are still third-most in a season in Clemson history.

As a member of the 1986 ACC Championship squad, Flagler set a Clemson regular-season record for rushing yards per game. One of his biggest games in the 1986 season was against Wake Forest in Winston-Salem, NC, where he scored four touchdowns and amassed 274 all-purpose yards. In all, he totaled 1,446 all-purpose yards in the 1986 season thanks to his 1,258 rushing yards and 188 receiving yards.

By the end of the 1986 season, Flagler had set 10 Clemson records, including the single-game mark for all-purpose yards. He became the first Tiger to total 200 rushing yards twice in one season.

Flagler touched the ball in almost 40 percent of the Tigers’ offensive plays in the 1986 season and finished as the leading scorer in the ACC with 78 points on his 13 touchdowns.

Flagler was selected in the first round of the 1987 NFL draft by the San Francisco 49ers. During his NFL career, he played on two Super Bowl Championship teams, both with the 49ers.

Chrissy FloydWomen’s Basketball • 1999-03 Chrissy Floyd, Clemson’s first four-time All-ACC women’s basketball player, was a member of the Lady Tigers from 1999-03. She finished her career with 1,937 points, second on Clemson’s career list and 15th in ACC history.

To add to her record-setting career at Clemson, Floyd was sixth in school history in career steals (218) and fourth in three-point field goals (124).

Floyd was named to the ACC’s 50-Year Anniversary team in 2002. In 2001, Floyd played on the USA World University Games team, as the squad captured the gold medal with a 7-1 record. She was named to the USA team again in 2003.

Floyd played under Head Coach Jim Davis and graduated with a degree in marketing. She was selected #37 overall in the third round of the 2003 WNBA draft by the Seattle Storm and became only the second Lady Tiger to be drafted by the league.

During her senior season, Kibben was among the top-10 players in the country in hitting. She set the Clemson career record for kills, total attempts, and hitting percentage. Kibben is still second in school history in career kills and is in the top 10 in career attempts, blocks, aces, and digs.

Kibben was named ACC Player-of-the-Week seven times during her career and held the Clemson record for kills in a match with 32 against Auburn in 1993. She also led the team in almost every category during her time at Clemson, and in 2002, she received the honor of being on the ACC 50-Year Anniversary team.

Matthew LeCroyBaseball • 1995-97 Matthew LeCroy, a native of Belton, SC, was a versatile baseball player for Clemson from 1995-97 before going on to play in the Major Leagues. The 1995 ACC Rookie-of-the-Year and runner-up for 1995 national freshman-of-the-year honors was a starter on two College World Series teams. The Tigers played in the College World Series in back-to-back seasons (1995,96).

LeCroy set Tiger freshman records for home runs (15) and RBIs (72). In the summer of 1995 when LeCroy was playing for the USA National Team, he drove in at least one run in every NBC World Series game and homered in five of the seven games, helping lead the United States to the NBC crown.

He homered in a record five consecutive games during the 1996 Clemson season and was a member of the United States Olympic team that same year, winning a bronze medal in Atlanta. In 1997, LeCroy was named a first-team All-American, and by the end of the season, he was fourth in Clemson history in career home runs (53) and eighth in RBIs (208).

LeCroy was a First-Team All-ACC selection in 1996 and 1997 and was later named to the ACC 50-Year Anniversary team. LeCroy was the #50 overall selection in the 1997 draft by the Minnesota Twins.

He played eight seasons in the Majors, where he hit 60 career home runs. The versatile LeCroy played catcher, first base, and was a designated hitter in the Major Leagues. LeCroy is now the manager for the Harrisburg Senators, the AA affiliate of the Washington Nationals.

Cydonie MothersillWomen’s Track & Field • 2000-01 Cydonie Mothersill, a sprinter from the Cayman Islands, ran track for the Tigers in 2000-01. While attending Clemson, Mothersill was a six-time ACC Champion and was the 2001 ACC Outdoor Overall Meet MVP. In the ACC, she claimed indoor titles in the 200m and 4x400m relay.

She earned outdoor titles in the 100m, 200m, 4x100m relay, and 4x400m relay. On a national stage, Mothersill was the national indoor champion in the 200m, which led to her becoming an All-American in the event in addition to her All-America status in the indoor 4x400m relay.

Mothersill was the national outdoor champion in the 4x400m relay and received All-America honors in the outdoor 4x400m relay and 4x100m relay. She was a recipient of the Frank Howard Award in 2001 and was later named to the ACC 50-Year Anniversary team.

After college, Mothersill went on to run professionally. She has represented the Cayman Islands in the last four summer Olympic games. She finished eighth in the 2008 games in the 200m.

In 2001, Mothersill won a bronze medal at the World Championships, won a silver medal at the 2003 Pan American Games, and won a gold medal at the Commonwealth Games in India in 2012.

Competing in these three long-distance events over a two-day period is very difficult, making Ogaro’s performance in each event even more impressive. In winning these three events, Maryland’s streak of 25 years of consecutive ACC Championships at the ACC outdoor meet ended, giving Clemson its first ACC track & field title.

Ogaro was an All-American in the 3000m steeplechase in 1981 and set the Clemson record in the event. He finished his Tiger career with the second-best 10,000m time. In cross country, Ogaro was named All-ACC in 1980 and won the ACC individual title in 1981. Ogaro passed away in May in his native country of Kenya.

Ray WilliamsBaseball & Football • 1983-87 Ray Williams, one of Clemson’s best two-sport athletes, participated on both the football and baseball teams from 1983-87. He still remains the only Clemson four-year baseball and football starter on record. Williams became the first freshman in school history to lead the team in receiving.

During the 1985 season, Williams was the only player who rushed, caught, and passed for a touchdown. In July of 1986, Williams had surgery on his hip, and it was feared that he would not return to the field before October. However, Williams stuck to his rehabilitation program and played all 12 football games in the fall. That year, he was awarded the ACC’s Brian Piccolo Award for his courageous comeback.

Williams finished his football career in the top 25 in Clemson history in receptions (86) and receiving yards (1,290). He averaged 20.5 yards per kickoff return, totaling 1,350 yards by the end of his career, which set a Tiger record.

On the baseball diamond, Williams finished second in school history with 70 stolen bases and became the first Tiger to total 30 home runs and 70 stolen bases in a career. Of William’s 34 career home runs, 16 came during the 1986 season.

Williams had the opportunity to play under two legendary coaches in their respective sports, Danny Ford and Bill Wilhelm. Williams also followed his passions off the field. He is highly involved in helping those with special needs. He has been on the board of directors for the South Carolina Special Olympics for many years and still remains highly active. His athletic and philanthropic activities show Williams’ hard work and drive to succeed.