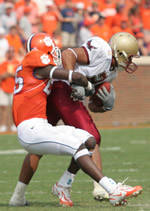 As we look forward to the upcoming football season, we hope you share the excitement, momentum and anticipation that normally exist before the start of a new season that exists. There has certainly been a lot of “talk” about the much anticipated road games; therefore, we would like to address some of the items that may arise this spring for IPTAY donors. The Clemson faithful always provide a strong following for the Tigers on the road. The Tigers will be making three trips this fall to destinations that will be somewhat new for many of us.

The normal trips include a September trip to Tallahassee to take on the Florida State Seminoles and a trip to Winston-Salem in early October to play the Wake Forest Demon Deacons. Two of the three remaining opponents have caused a refining of the existing IPTAY Board of Directors’ approved policies for ordering tickets to away games. Clemson expects to receive an adequate number of tickets from Temple to cover the demand. However, the limited number of tickets available at Boston College and Virginia Tech has resulted in the refinement of the existing IPTAY policy for ordering tickets to away football games.

Beginning with the 2006 season, only IPTAY donors who qualify and purchase season tickets will be eligible to order tickets for away football games. Those IPTAY donors who meet the appropriate criteria will receive an away game ticket application in late April. Additionally, priority point totals that have customarily been used to establish a criteria for ordering tickets for the game against USC in Columbia will also be established for games at Boston College and Virginia Tech.

The main reason for this refinement is due to the fact that less than 3,000 individual tickets will be available at each of these sites for IPTAY donors to purchase after tickets are pulled for the University Administration, player complimentary admissions, Tiger Band, Athletic Department Employees (including the football staff), and Clemson students. The refinement of the policy will require donors to be season ticket holders and we will use priority point totals as criteria for establishing ticket order limits for games that ticket availability will not meet demand.

If tickets remain available after the top 1500 donors order, the ticket office will allow the next group of season ticket holders to order away game tickets. This was the case for the 2005 game against USC in Columbia and the last two ACC Men’s Basketball Tournaments. As in past years, IPTAY donors that are season ticket holders will be allowed to order tickets for the games at Florida State, Wake Forest, and Temple without restrictions.

This policy places an emphasis on rewarding season ticket holders within the established IPTAY priority point system, as intended by the IPTAY Board of Directors. The same policy of allowing season ticket holders to order quantities based on priority point totals will be used when Clemson participates in the ACC Championship Football Game and post-season bowl games, as needed.

Specific priority point totals are impossible to determine until the season ticket renewal process is completed. However, looking at last year’s priority point totals of IPTAY season ticket holders it is anticipated that the top 100 donors eligible to order four tickets will have more than 700 points and that it will require over 175 points to be eligible to order two tickets.

As always, we appreciate you as IPTAY Donors and wanted to provide this opportunity to communicate to you in a prompt, efficient and effective manner.

We are certain that the tremendous support you have demonstrated in the past for all of our athletic teams will continue in the future. There is nothing more exciting for our athletic teams than to look up in the stands of an opposing team and see a “sea of orange”.

Clemson Athletics is definitely on the move and there is not a better time to be an IPTAY member and to support our student-athletes. The excitement and momentum of Clemson Athletics is growing and, with your support, will enable us to compete for conference championships and continue our high graduation rates.

Finally, the Clemson University Athletic Department and IPTAY thank you for your continued support. Thank you!