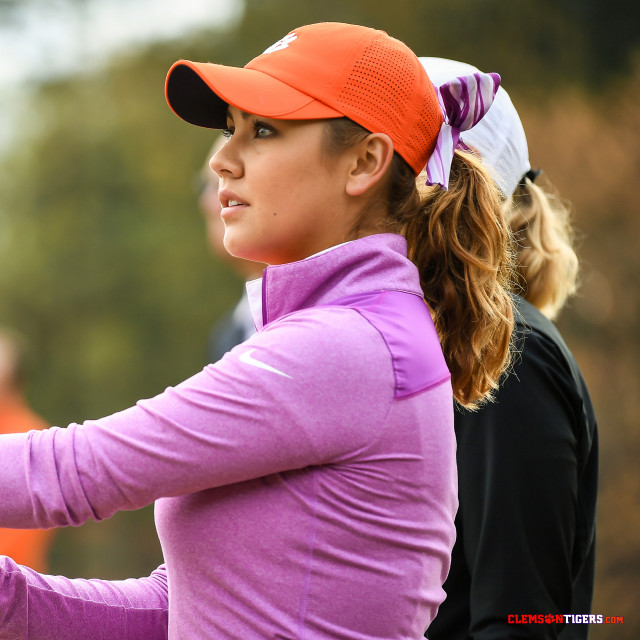 Following a Guiding Light To Greatness

Sophomore Ana Paula Valdes first swung a golf club at the age of four and first played on a golf course when she was five. Her family and neighbors in Morelia, Mexico were avid golfers, so her interest piqued at an early age.

But in addition to her family and neighbors, she had a great role model to spark her interest, and that person has given her and many others from her homeland a guiding light.

“I grew up watching Lorena Ochoa play on television,” said Valdes. “She was from the same area in Mexico and we had an LPGA event at the course I played. I got to meet her and watch her play when I was a kid. She was inspiring.”

After just seven years as a professional, a career that included 27 wins, 158 consecutive weeks as the No. 1 player in the world and four LPGA Player-of-the-Year awards, she retired at age 28 as one of the most respected and beloved players on tour. In 2017, she became one of the youngest golfers to be inducted into the World Golf Hall of Fame.

Even more important to Valdes, she had become an icon in Mexico.

“I have always tried to pattern my game and my approach after her. She was and still is a great role model.”

Valdes made the most of her opportunities as a youth, playing with the Mexican national junior team in many international competitions. But to make the most of her talents, a move to the United States was necessary. With it came some sacrifices.

“But I was offered a scholarship when I was 14 and took it not knowing how long I would stay.”

Valdes is close to her parents. Her father is in insurance and some other business ventures, and her mother is a lawyer. Her older sister, who also played college golf, just graduated from a school in Iowa and will be pursuing a Ph.D., in biology.

“I loved it here and stayed in the United States for my four years of high school.”

She played at Heritage Academy in Hilton Head during her first three years, then spent her senior year at Montverde (Fla.) Academy.

“It was a maturing experience because I was away from my family. I basically moved out at age 14, which was tough. I had to learn to cook for myself, do my own laundry and many other things. The whole experience made me grow up fast and become responsible.

“But the experience gave me more and more opportunities.”

One of those opportunities was a college golf scholarship.

Valdes was one of the most highly recruited golfers in the country thanks to her success as a junior player. A second-team AJGA All-American, she was a two-time winner of the Sea Pines Junior Heritage in Hilton Head. She won the 2014 event by an impressive five shots. She also won the Porter Cup thanks to a final-round 65. That was a big win, because it was her first amateur victory in a field that included all amateurs, not just juniors.

So, how did the young lady from Mexico end up at Clemson?

“Living in Hilton Head, I played in a lot of junior tournaments in South Carolina, so I became familiar with the state and Clemson. I made a visit when I was a freshman in high school and fell in love with it the first time.

“J.T. Horton was the coach and recruited me. He was the first coach to recruit me, so Clemson was the first school that I visited. He was very enthusiastic about the program.

“I took other visits over the next year, but every time I came home, I compared the experience to Clemson and concluded that I liked Clemson better.”

As a sophomore in high school, Valdes came on a visit a second time on a Clemson football weekend. That experienced clinched her commitment and eventual signing.

“I had never been to a football game before, and it was so impressive to see such a great crowd getting behind the team. I had never tailgated either, and that was a lot of fun.”

Valdes committed as a sophomore, and although there was a coaching change, she held her commitment and enrolled at Clemson in August 2016 to play for first-year head coach Kelley Hester.

“One of the things that was attractive to me about Clemson was that it was a young program and I had a chance to help it do some things that had not been done before. Coach Hester has stressed that, and we were able make that happen last year.”

Valdes was the No. 2 player on Clemson’s 2016-17 squad as a freshman. She was a big reason the team finished a program-best fifth at the ACC Championship and advanced to the NCAA National Tournament for the first time. There, the team finished 20th, the first top-20 finish in program history.

Valdes finished her freshman year with a 74.3 stroke average, but played her best golf in the postseason. She finished eighth at the ACC Championship with an even-par score of 216 after three consecutive rounds of even par. She became the first Tiger to finish in the top 10 at the conference tournament and the first to shoot even par for the 54 holes.

For the year, she set a school record with nine rounds at even par, and she was second on the team in rounds at par or better (14).

Valdes continued to improve in the fall with a 72.1 stroke average, including five rounds under par. She had a career-best fourth-place finish at the Schooner Fall Classic at Oklahoma, where she had rounds of 68, 72 and 67. The 67 was her career-best round and just two shots off the Clemson single-round record.

“Ana Paula started her freshman year at Clemson as a highly-anticipated, long-time commitment,” said Hester. “True to the hype, she was one of the most naturally talented young players I had seen.

“With club-head speed over 100 mph and a creative short game with soft hands, it didn’t take ‘AP’ long to secure her spot in the lineup.

“The more comfortable Ana Paula has become in college golf, the lower her scores. As a young leader, she is also able to command the respect of her teammates and lead by example.”

There is no doubt the sky is the limit for Valdes. She just has to follow her guiding light to greatness.