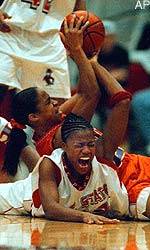 Tynesha Lewis scored 12 points for N.C. State (9-3, 1-3), which has lost three straight games. No other player was in double figures for the Wolfpack.

Clemson led 33-20 at halftime, but missed six of its first seven shots in the second half and committed three consecutive turnovers. That helped the Wolfpack move within 40-33 on Amelia Labador’s 3-pointer with 13:15 to play.

Clemson’s defense responded by forcing five turnovers on the Wolfpack’s next seven possessions and holding N.C. State to one field goal over the next 6:43.

The Tigers used a 19-6 run midway through the first half to lead 23-12 with 6:05 left in the half. Floyd hit four of her first eight shots, including a 3-pointer, and had 11 points at the break.