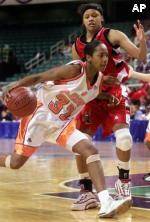 Clemson, SC – Two-time first-team All-ACC guard Chrissy Floyd was selected in the third round of the WNBA Draft by the Seattle Storm on Friday afternoon. The former Clemson standout was the 37th player taken in the draft.

She is the second Lady Tiger to be drafted by the league. Former center Erin Batth was taken in last year’s draft. Current Clemson assistant Itoro Umoh is the only Lady Tiger who has been named to an active WNBA roster, but she signed as a free agent after the completion of her Clemson career in 1999.

Floyd finished her Clemson career this past season with 1937 career points, second in school history. She was a first-team selection as a junior and senior and was a first-team All-District selection by the WBCA in 2003. The native of Laurens, SC was also a first-team All-ACC defensive player in 2002 and was named to the ACC’s 50-year Anniversary Team in 2003, one of just two active players in 2003 to be selected. Duke All-American Alana Beard was the other.

This past year Floyd averaged 17.4 points and 4.3 rebounds per game for the Lady Tigers. The 5-9 guard shot 44 percent from the field for her career and hit 73 percent from the foul line. She made 40 three-point goals this past season and 124 for her four-year career. She led the ACC in free throw shooting as a sophomore with an 81.8 figure in 2000-01.

Floyd hopes to join a Seattle team that finished 17-15 in the regular season last summer, but won seven of its last nine games to make the playoffs. The Storm is led by former UCONN All-American Sue Bird, who was a first-team WNBA team player in her rookie season. The team is coached by former Old Dominion All-American and former United States Olympian Anne Donnovan.