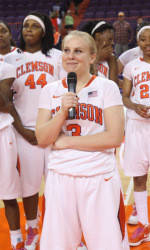 CLEMSON, SC – The Florida State Seminoles defeated the Clemson Lady Tigers, 74-52, in Littlejohn Coliseum Thursday on Senior Night. Clemson (6-20, 2-13 ACC) said “Thank You” to seniors Lauren Couch, Lindsey Mason, and Shaniqua Pauldo, all of whom earned the start on Thursday night. All three seniors were able to impact the game. Couch earned her first career start, and played five minutes, the second-highest total of her career. She tallied her first career point, hitting the second of two free throws in the second half. Pauldo had 11 points and six rebounds in the game, while Lindsey Mason crossed another shot-blocking milestone.Mason tallied two blocks, giving her 69 for the season, which is tied for the fifth-most in a single season in Clemson history. She ranks second in the ACC in shot-blocking at 2.7 per game, and is second in Clemson history with 160 career blocks. The win was Florida State’s (14-15, 6-9 ACC) eighth in a row in the series and second of the season over the Tigers, who finished the season 0-8 at home in ACC play. The Seminoles had 23 turnovers in the game, but Clemson hit for just 15 points on those miscues, while the Noles scored 22 points on Clemson’s 22 turnovers. Freshman Nikki Dixon and Pauldo led Clemson with 11 points apiece, while five Seminoles hit double-figures, led by 13 each from Chelsea Davis and Chasity Clayton. Dixon finished a rebound shy of her first career double-double, while also registering five steals. She entered the game ranked fourth in the ACC in steals per game. Clemson, who entered the contest ranked sixth in the country in shot-blocking at 6.1 per game, turned away six shots. But, it was Florida State’s interior defense, which tallied a Clemson opponent season-high 10 blocks, that held Clemson at bay and a .309 shooting night overall. It was the second straight game that a Clemson opponent hit for a higher percentage from outside the arc than in it. The Noles hit 6-13 (.462) from behind the line, while just .383 inside. Florida State outrebounded Clemson, 54-32, which included 23 offensive rebounds, to control the boards. Clemson was able to knock in 17-23 (.739) from the charity stripe, but Florida State made 20-31 from the line, capitalizing on Clemson’s 22 personal fouls. The Lady Tigers played all but three minutes of game time without the services of point guard and floor general Chelsea Lindsay, who suffered a leg injury during shootaround. Lindsay ranked fifth in the ACC, averaging 34.0 minutes per game. As a result, sophomore Chancie Dunn and Couch took over services in running the point. The teams traded buckets in the early going, as Clemson’s defense held Florida State’s offense to a 1-12 mark to start the game over the first 6:30. Trailing 11-9 after a pair of free throws from Quinyotta Pettaway, who had nine points, the Seminoles went on a 13-2 run to take a nine point lead on the back of three three-pointers in a 1:36 span. Clemson got back to within four on a three-pointer from Dixon, who had ten of her points in the first half. After a pair of free throws, Kelly Gramlich, who went a career-best 6-6 from the line hit a pair to again draw Clemson back to four, but Clemson would get no closer. After taking a 35-26 lead into the break, Florida State went on a 15-4 run during a five-minute span early in the second half to take a 51-32 lead with 13:07 to play. Clemson will close the regular season on Sunday at 2:00 pm in Atlanta as they take on Georgia Tech at Morehouse College. Clemson will travel to the ACC Tournament for a game on next Thursday at the Greensboro Coliseum.