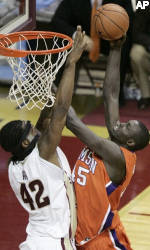 TALLAHASSEE, Fla. (AP) – Toney Douglas scored 23 points and Jason Rich 22 Tuesday to lead Florida State to a 64-55 win over Clemson, knocking the Tigers out of a third place tie in the Atlantic Coast Conference.

Clemson, meanwhile, was equally cold — connecting on just 3 of its first 16 attempts.

But they still managed to almost catch up, pulling to within 47-43 with 4:39 left on Demontez Stitt’s 3-point shot, but Rich and Douglas countered with six unanswered points to get Florida State’s lead back to 10 points with 3:02 left.

The Tigers shot just 30 percent from the field and were not much better from the free throw line, making 12 of 23.

The loss dropped Clemson into fourth place in the ACC, a half game back of Maryland, which is 7-4, and a half game ahead of fifth place Wake Forest, which is 6-5 in league play.

Clemson won its first meeting of the season with Florida State, 97-85 in double overtime on its home floor.