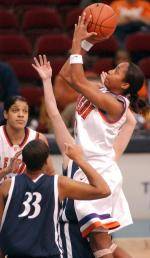 Clemson was led in scoring by Chrissy Floyd with 28 points. Floyd finished the game 11-25 from the field and 2-6 from the three-point line. She was also 4-5 from the free throw line.

In the first half, Florida State tied the score 19-19 as Angela Sutton hit one of two free throws. Julie Aderhold hit a three-point basket to give the Lady Tigers a 22-19 lead with 7:58 left. Florida State scored seven unanswered points to take a 26-22 lead with 5:30 remaining. Clemson scored seven straight points and took a 29-26 lead with 3:50 left as Aderhold hit another three-point basket. Florida State finished the half scoring six straight points and took a 32-29 lead at the half.

Florida State outscored the Lady Tigers 17-11 to open the second half, and had a 49-40 lead with 11:22 left in the game. Morris scored 10 points in this Seminole run. The Lady Tigers went on a 14-7 run to narrow the lead 56-54 with 4:40 left in the game. From this point, the Seminoles scored six unanswered points, four by Morris, and had a 62-54 lead with 2:35 remaining. Clemson came within five 64-59, with :46 seconds remaining as Lakeia Stokes scored a field goal and hit a free throw to complete the three point play. Florida State’s Holly Johnson hit two free throws to give the Seminoles a 66-59 lead with 40 seconds left to extend their lead. Florida State finished the game 23-52 from the field for a .442 pct. Clemson was 24-66 from the floor for a .364 mark.

“It was a very competitive basketball game,” said Clemson Head Coach Jim Davis. “Give Florida State the credit. Our inability to score was a key to the game, and I think Florida State’s defensive pressure had a lot to do with that today. Florida State had 15 second chance points and they scored 18 points from the free throw line. Florida State did a great job getting the ball inside and drawing the foul. We did not do a great job in that area today.”