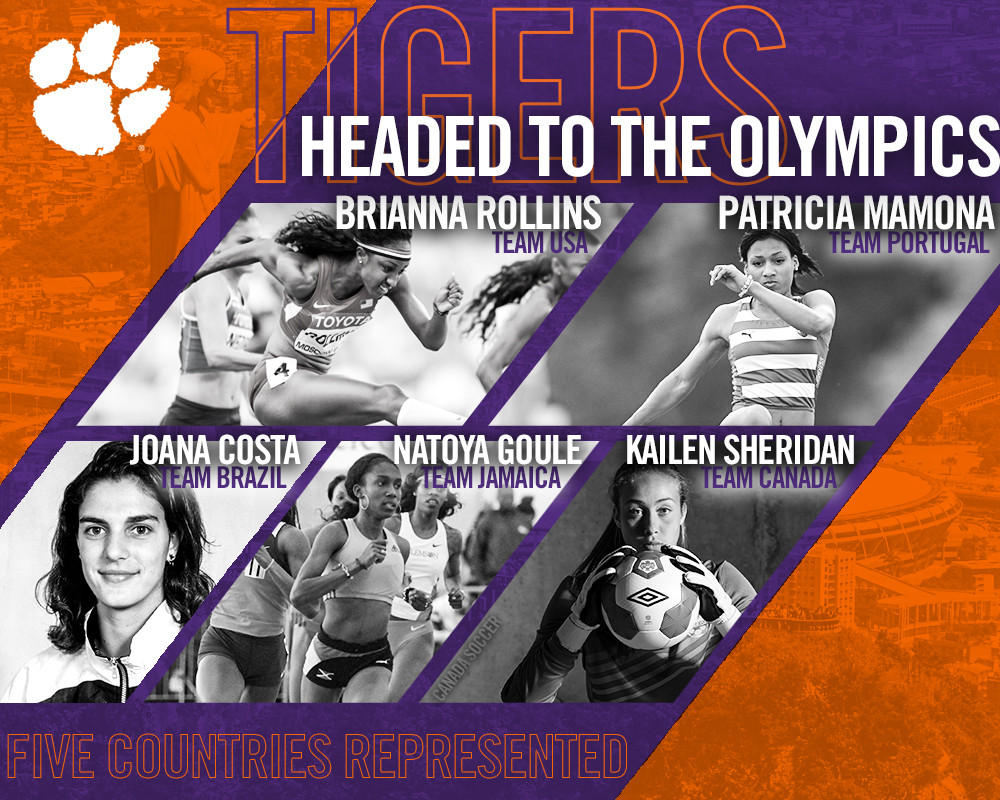 Five Tigers Are Headed to Rio

Brianna Rollins | Class of 2012 | USARollins qualified for her first Olympics and is Clemson’s lone representative on Team USA. She won her second USA crown in the women’s 100 hurdles last Friday with a time of 12.34, second-fastest in the world in 2016. Rollins was the 2013 USA and World Champion in the event and is a former American record-holder as well. She competed at Clemson from 2010-13, and claimed three national titles and set NCAA indoor and outdoor records in the high hurdles. Rollins graduated from Clemson in December 2013, the same month she was also awarded The Bowerman as the top collegiate track & field female.

Patricia Mamona | Class of 2011 | PortugalMamona qualified for her second Olympics, and will be representing her native country of Portugal. She won the European Championship in the women’s triple jump, with a national-record leap of 47-10 (14.58m). Mamona finished 13th in the event at the 2012 London Games. She competed at Clemson from 2007-11, winning two national titles and setting school records in the indoor and outdoor triple jump. Mamona graduated from Clemson in May 2011.

Natoya Goule | Class of 2015 | JamaicaGoule is a first-time qualifier from Jamaica. The 2015 NCAA Indoor Champion in the women’s 800 meters for Clemson won her country’s fourth straight national championship to earn the bid to Rio. Goule owns a personal-best 1:59.38 and ranks 16th in the world this season. Goule graduated from Clemson in May 2015.

Joana Costa | Class of 2003 | BrazilCosta is the oldest qualifier among the group at 34, and will be making her first appearance representing Brazil, the host country. She hit the qualifying standard by clearing 14-9 to finish runner-up in the Brazilian Trials on July 3. Costa was the first Clemson female to qualify for the NCAA Championships in the pole vault in 2003. She graduated from Clemson in May 2004.

Kailen Sheridan | Class of 2017 | CanadaSheridan will travel with Team Canada as an alternate goalkeeper with their first test slated for 2:00 p.m., against Australia on August 3. This is Sheridan’s first Olympics, however, she is no stranger to the national stage as she was a member of Canada’s Women’s National Team that won the nation’s first Algarve Cup in 2015, as well as Canada’s U-20 and U-17 teams. The Whitby, Ontario native has enjoyed a decorated collegiate career, earning All-America honors as a junior along with All-ACC honors each of her three seasons in goal for the Tigers. Last year she recorded 57 saves with a 1.03 goals against average and blanked opponents seven times. Her seven shutouts in 2015 give her 22 in her career, which stands as the second most in Clemson history.