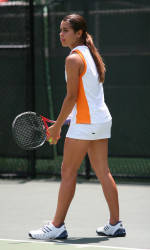 South Carolina’s Delta Chapter was installed on Apr. 2, 2007, making Clemson one of 276 colleges and universities with a chapter of Phi Beta Kappa, the nation’s oldest and largest academic honor society.

Balderston served as a team captain for the 2007-08 men’s swimming and diving team, leading the squad to 12 dual-meet wins, second most in program history. The biochemistry major from Chesapeake, VA ranks sixth in Clemson history in the 50m free and swam the first leg for the record-setting 200m free relay team. Balderston was recently awarded an NCAA post-graduate scholarship and plans to attend medical school.

Eckman, who hails from St. Charles, IL, was a key component on the 2007 ACC Champion Tiger volleyball team. She played in all 31 matches as a defensive specialist, recording a team-high 36 service aces and 254 digs. The history major was named to the 2007 ACC All-Academic Volleyball Team, her second such honor after earning a selection in 2005 as well. Following her graduation from Clemson later this month, Eckman intends to work towards a Juris Doctor degree.

Gerber is a member of the 2008 ACC Champion women’s tennis team and has been a part of three NCAA Tournament teams at Clemson since transferring from West Virginia in 2005. The Vienna, WV native was named an ITA Scholar Athlete in 2006 and 2007, becoming just the second player in Tiger women’s tennis history to twice earn the honor. Gerber, a constant on the ACC and Clemson academic honor rolls, plans to attend medical school in the future.

Jennings, a native of Seattle, WA, was a captain for the Tiger rowing team during the 2007-08 season. She was a member of the Varsity 4+ crew that came in second at the ACC Championships this year and was selected to the Academic All-ACC team in 2006 and 2007. Jennings was also named a CRCA South Region National Scholar Athlete in 2006 and 2007. She is pursuing a degree in political science.

Maners, a native of Rock Hill, SC, ranked 20th in the nation in punting for Clemson’s top 25 football team that finished with a 9-4 record this past season. He averaged 42.8 yards per punt, the best by a Clemson punter since 1990. He was named to the All-ACC Academic team this year and will receive his undergraduate degree in history on May 9. He will return to the Clemson team in 2008 as a graduate student.