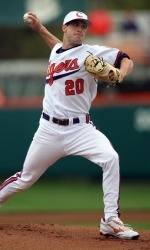 Righthanders Doug Kingsmore Stadium on Saturday night. The Tigers, who took a 2-0 series lead, improved to 18-12 overall and 6-8 in the ACC. Clemson also won its 10th home game in a row. The Terrapins fell to 14-17 overall and 2-12 in ACC play.

Eric Potter (2-4), the first of three Maryland hurlers, suffered the loss. He gave up two hits, four runs, and one walk in 0.1 innings pitched.

Maryland’s best chance to dent the scoreboard came in the top of the first inning. Firth surrendered three walks and a wild pitch in the opening frame, and a Tiger error on a would-be pickoff gave Maryland an extra out. But Firth worked out of a one-out, bases-loaded jam to keep Maryland off the scoreboard.

John Hinson led off the bottom of the first with a hit-by-pitch, stole second, and moved to third on Jeff Schaus walked, Brad Miller belted a double to left field to score Schaus and Shaffer. Will Lamb followed with a line-drive single to right field to plate Miller, giving Clemson a 4-0 lead.

Schaus led off the fifth inning with a double to left field and moved to third on a passed ball. Another passed ball allowed Schaus to score.

The Tigers tacked on two more runs in the sixth inning when Pohl laced a two-run homer to left-center, his third long ball of the year. Pohl’s home run also drove in Hinson, who reached on an error.

Miller went 3-for-4 with a double, two RBIs, and a walk to lead Clemson, who had 13 hits in the game. Shaffer went 3-for-5 with an RBI, while Pohl went 2-for-5 with a two-run homer. Lamb added two hits and Schaus went 1-for-2 with two runs and three walks.

Clemson and Maryland will play the series-finale on Sunday at 1:00 PM.