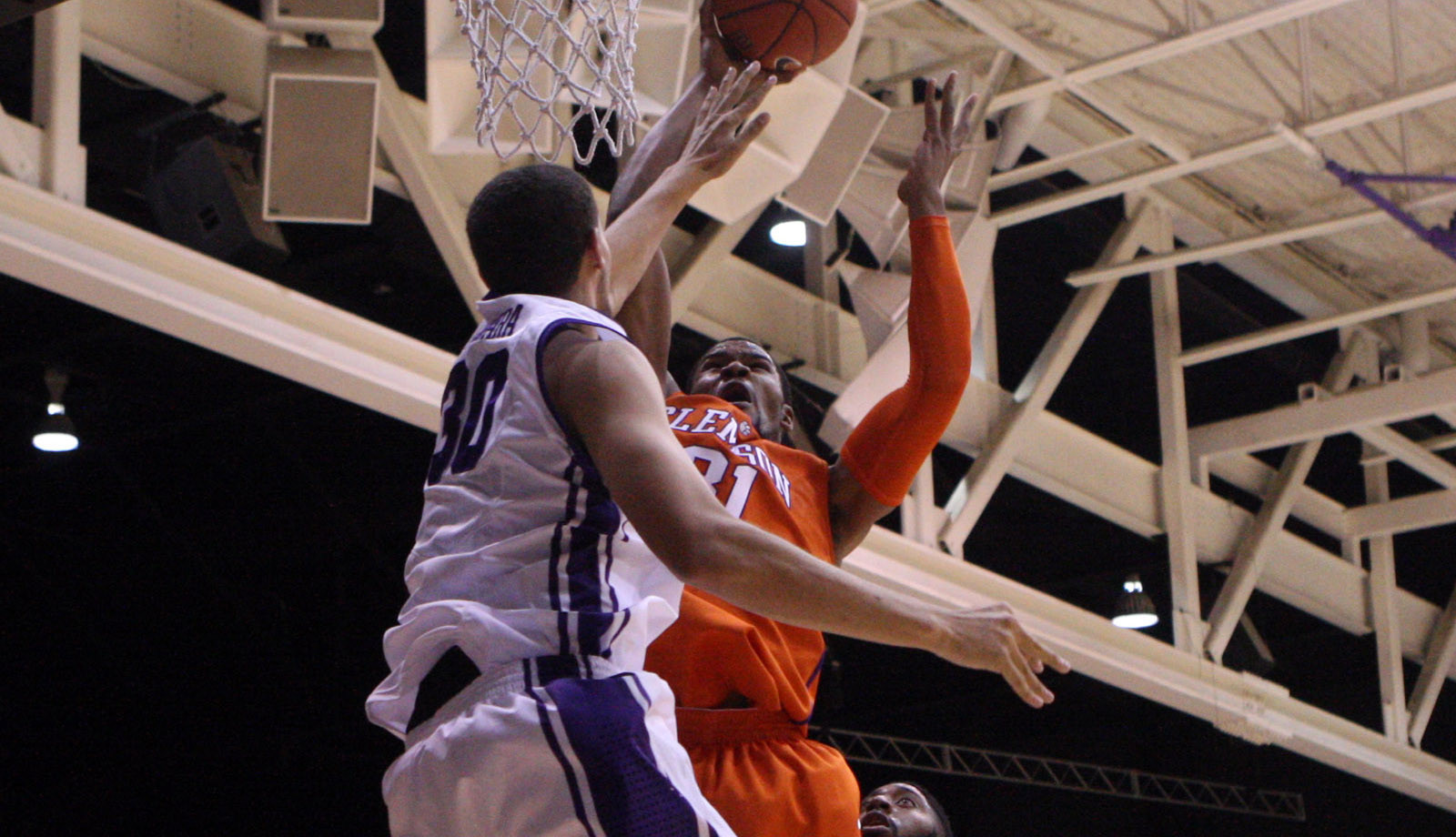 First Half Spurt Leads Clemson to 72-55 Victory at Furman

GREENVILLE, SC – Clemson used a 16-1 spurt in the opening half to pull away in a 72-55 road victory over Furman on Friday. The Tigers improved to 2-0 in what was Clemson’s 29th consecutive win in the series over the Paladins. It was Clemson’s first game ever played in Timmons Arena, which opened in 1998. Furman fell to 1-2 with the loss.Devin Booker led the Tigers with 15 points, despite playing only 23 minutes due to first-half foul trouble. K.J. McDaniels added 11 and went 7-of-8 from the free throw line. In all, nine players scored for the Tigers. Damarcus Harrison scored eight of his 10 points in the second half. Clemson’s starting point guard Rod Hall was efficient with nine points and six assists, with no turnovers in 28 minutes.Stephen Croone led Furman with 15 points, while Bryant Irwin added 14 and Colin Reddick 13. Reddick got loose inside for several quick baskets in the first half, but he did not score a field goal in the final 23 minutes of the game as Clemson tightened defensively. Clemson shot 28-of-57 for the contest, 49 percent overall. The Tigers made 14-of-20 free throws for a 70 percent mark as well. Clemson out-rebounded the smaller Paladins, 31-24, and committed just eight turnovers. Furman had 16 giveaways, which led to a 29-5 advantage in points off turnovers for Clemson. The Tigers also outscored the Paladins’ bench by a 28-4 margin.Furman hung tough early, with Reddick getting open underneath for a pair of dunks. Furman tied the game at 12 apiece on a third Reddick basket, but Clemson responded with a 16-1 run that included six free throws in six tries by McDaniels. A free throw by Furman’s Bryant Irwin briefly stopped the run, but Clemson came right back on the other end with a driving layup by Bernard Sullivan and hook shot by Landry Nnoko.Stephen Croone hit a floater in the paint with 4:42 left in the first half, Furman’s first field goal in a span of over seven minutes. Clemson’s lead extended to 19 at 35-16 on a driving layup and free throw from Filer. Furman pulled to within 15 on a pair of Irwin free throws to make it 39-24, but Sullivan scored on a follow after a Filer miss in the final seconds to push the lead to 17 at intermission.McDaniels brought the Tiger crowd to its feet early in the second half with a spectacular left-handed follow dunk that made the lead 46-27. He followed minutes later with a slam off a fastbreak assist from Hall. The Paladins cut the lead to 55-37 after a 7-4 run, but Harrison found freshman center Nnoko inside for a dunk on the other end to push the lead back to 20 with 11:23 left.Clemson’s senior combination of Milton Jennings and Booker connected on a pass into the paint for a layup that gave the Tigers a 64-41 advantage. One possession later for the Tigers, Booker took a lob pass from Hall and emphatically slammed home the alley-oop. Furman actually tied Clemson in the second half, 31-31, but the lead never got any closer than the final margin of 17 points.The Tigers return to action next week as part of the Old Spice Classic in Orlando, FL. The eight-team tournament will be held at Disney’s Wide World of Sports Complex. The Tigers will be guaranteed games on Thursday, Friday and Sunday. Clemson will take on No. 19 ranked Gonzaga at 9:00 PM on Thursday, Nov. 22. The game will be televised by ESPN2.