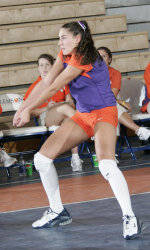 It marks the second time in her decorated career that she has been named ACC Player of the Week. She previously did so last season, when she was selected the week of September 29-October 5.

Finn recorded 20 kills and hit .348 in a 3-0 sweep of Georgia Southern on Tuesday. She also had 12 digs, three blocks, and one service ace. In the win over Miami last Friday, she hit .477 while collecting 24 kills and 17 digs. She followed that on Saturday with 27 kills and 11 digs in the 3-1 loss to Florida State.

Finn moved into third place on the Tigers’ all-time kills list with her performances. She is just 76 kills shy of tying former Tiger great Robin Kibben (1991-94) for first on the career list. She has 1,728 kills in her career. Finn currently leads the ACC with 5.50 kills per game, and she has topped the 500-kill mark for the second consecutive season.