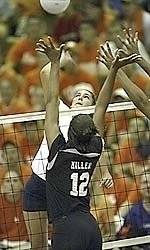 Clemson senior captain Leslie Finn is 13th in the latest volleyball statistical rankings with 5.37 kills per game. The leader in that category is Stacy Gordon of Ohio State at 7.20 per game. Finn trails ACC leader and 12th-place Sarah Kirkwood of Virginia, who is averaging 5.39 per game.

Finn is seventh on Clemson’s career kills list with 1,383, trailing current assistant coach Jodi Steffes who is in sixth place with 1,422. Finn leads the Tiger volleyball squad with 161 total kills this season, including 60 last weekend when she lead Clemson to the Big Orange Bash title. She earned MVP honors at the event for her play.

In the season opener against Western Carolina, Finn turned in a brilliant all-around performance with a career-best .720 hitting percentage and 19 kills. She followed that September 10 in the Clemson Invitational with 22 kills in the upset of then #21 Northern Iowa. Her season-high kill total came against Winthrop, when she recorded 28 kills.