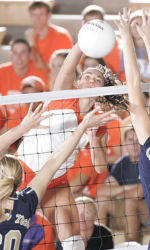 Clemson senior outside hitter Leslie Finn was named to the All-East Region team by the American Volleyball Coaches Association (AVCA) on Wednesday. Fellow senior Lori Ashton received honorable mention from the AVCA for her efforts this season.

It marked the second straight year that Finn has earned AVCA All-Region honors. She led the Clemson team and entire ACC with 684 kills and 5.61 per game this season. Both marks were single-season school records. Finn also broke the career record for most kills, finishing her brilliant career with 1,906. Finn also was second on the team this year with 387 digs, equating to 3.17 per game. She was a first-team All-ACC selection this year.

Finn played a big role in Clemson’s upset win over #1 seed Georgia Tech at the ACC Tournament this season. The senior captain had 30 kills in leading Clemson to the 3-1 victory over the undefeated regular season ACC champions. She was named to the All-Tournament team for her efforts.

Ashton, a two-time AVCA All-Region honoree, received honorable mention after leading the Clemson team and posting a top five ACC mark with a .363 hitting percentage this season. In fact, Ashton concluded her collegiate career as Clemson’s record-holder with a .335 career hitting percentage. Ashton was second on the Clemson team this fall with 490 kills. She also had 140 total blocks and was a second-team All-ACC performer this season.