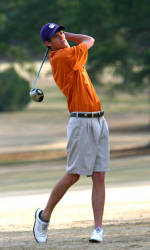 Final Round of The Brickyard Washed Out

Clemson, SC – The final round of the third annual Brickyard Invitational in Macon, GA was cancelled due to rain on Monday. Most of the field had started play on Monday in the final round, but consistent rain washed out the round and scores reverted to the end of the second round.

Clemson thus finishes in a tie for second in the 15-team field. Augusta State won the tournament with a 36-hole score of 563, while Clemson was tied with Chattanooga for second at 576. Georgia was fourth at 579. Other ACC schools included Florida State (tied for seventh at 588), Virginia Tech, tied for seventh at 588 and Georgia Tech, who finished 12th at 593.

Clemson’s best finisher at the tournament was Luke Hopkins who had a second round 69 to record his first career top 10. The red-shirt senior had a 142 total for the 36 holes, good enough for a tie for 10th place.

Sophomore Jacob Burger had his top tournament as a young Tiger with rounds of 73-71 on the par 72 course and finished at even par 144, good enough for 15th place. Freshman Crawford Reeves had a 145 total for his two rounds and finished in a tie for 21st, his top performance of the year.

Clemson will conclude its fall schedule at the Isleworth Collegiate in Windermere, FL October 25-27.