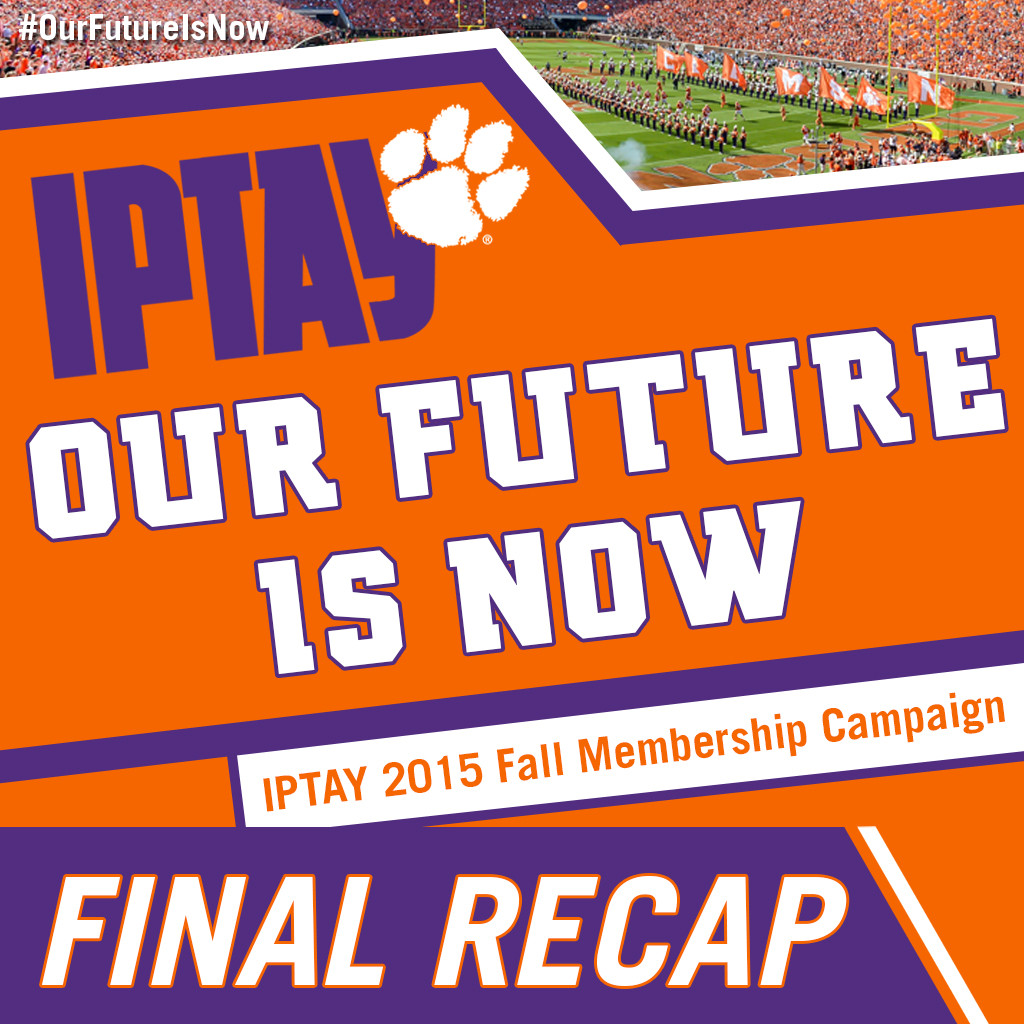 A new year and a new semester have arrived here at Clemson University and the turn of the calendar from December to January officially marked the end of our fall membership campaign,  “Our Future Is Now”. The entire IPTAY staff would like to thank all those who participated. Your support is making a difference in the lives of young men and women and for that we are grateful! To all the participants, we hope you were able to use your 10% discount on something special at the official shop of the Clemson Tigers, shop.clemsontigers.com. In addition, congratulations are in order for the 60 IPTAY members who were named monthly winners and received either a signed football by Coach Dabo Swinney or a signed basketball by Coach Brad Brownell.

The campaign was a smashing success on many levels especially in the area of renewals. Thanks to our fantastic donors we were able to exceed our renewal goal by nearly 200, as 5,516 renewals were made by December 31st.  The campaign also yielded over 470 new IPTAY members to the team. We are excited to have them on board and look forward to further growth as the IPTAY 2015 year continues. The graphic shown below shows the final numbers from the campaign.

Now for the moment we have all been waiting for! The three grand prize winners for the campaign are shown in the graphic below. Each of these three winners will be each receiving their very own Nike Clemson team gear package in the coming days via the mail.

What a fall we just had! Clemson student-athletes are excelling and that is in large part to our nearly 15,000 donors who support IPTAY and Clemson Athletics. If you have yet to renew for IPTAY 2015, now is the time to do so! In order to receive the 2015 football season ticket application, 50% of your IPTAY pledge is due by February 15th. You can join or renew online by clicking HERE, over the phone by calling 1-800-CLEMSON, stopping by the IPTAY Office located on 1 Avenue of Champions, or by mailing in your donation to PO Box 1529 Clemson, SC 29633. As a reminder, the IPTAY office is open Monday-Friday 8:00am-4:30pm.