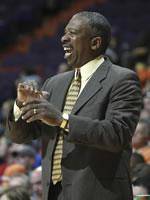 Clemson finished the year with two wins over teams ranked inthe top 15 in the nation at the time of the games. Clemson defeated12th ranked North Carolina on January 31 and 14th ranked NC Stateon Feb. 18. This marked the first time Clemson had beaten two top15 teams in the same season since 1996-97 when Rick Barnes led theTigers to the Sweet 16 of the NCAA Tournament. Clemson shot 11-13from the three-point line in the win over North Carolina. The .846three-point percentage is the sixth best in NCAA history (min of 10three-point goals made) and the best performance by any team in thenation this year. Clemson’s win over NC State on Feb. 18 was its50th all-time win over a top 25 team in the history of LittlejohnColiseum. Clemson defeated four teams that were chosen to the NCAATournament. The victories came against East Tennessee State, BostonCollege, North Carolina and NC State. All four of those teams wonat least 20 games in 2003-04. Clemson played 10 teams a total of 16games against teams that advanced to the NCAA tournament. This wasthe most different NCAA Tournament teams that Clemson has faced inone season. Clemson’s 16 games against NCAA Tournament teams tied aClemson single season record and was topped only by Duke’s 18during the 2003-04 season. Clemson played its most difficultschedule in history. Twenty-three of Clemson’s final 25 games wereagainst teams that advanced to postseason play. Six of Clemson’snon-conference foes advanced to postseason play. Every Clemson gamefrom Christmas Day on was against a team that is playing inpostseason. Clemson had a strength of schedule ranked second bySagarin and sixth by RPI. Team had a +3.9 rebound margin, second inthe ACC heading into the NCAA Tournament behind North Carolina.Clemson had a +28 rebound margin against ETSU and a +27 againstGardner-Webb, two of the top 10 single game rebound margins inClemson history. Only one team shot over 50 percent from the fieldagainst the Tigers all season.

Senior Chris Hobbs finished his career with 679 rebounds, 11thon the Clemson all-time list. He was also 17th in career field goalpercentage (.528). Hobbs was the first Tiger to play in three winsover North Carolina in a career since Bobby Conrad, 1976-80. Hetook 16 charges in 2003-04, most by a Clemson player since JerryPryor took 21 in 1987-88. Sharrod Ford led Clemson in scoring andrebounding, the first Clemson player to do that in the same seasonsince 1994-95 when Greg Buckner did it. Ford ranked second in theACC in blocked shots and sixth in rebounding. He is seventh inschool history in blocked shots (109) and is fifth in field goalpercentage (.561). He was an honorable mention All-ACC Defensiveteam selection. Shawan Robinson made 37.4 percent of histhree-point shots and now has a .408 percentage for his career,sixth best in Clemson history. He scored a career high 24 points on5-6 three-point shooting in the victory over North Carolina.Freshman Vernon Hamilton nearly became the first guard in Clemsonhistory to record a triple-double when he had 13 points, 11rebounds and nine assists in the win over Boston College onDecember 30. Hamilton was an honorable mention ACC All-Freshmanteam selection. He was the first freshman to lead Clemson in stealsand assists since Terrell McIntyre in 1995-96. He had 50 steals,second most in Clemson history by a freshman behind Greg Buckner’s63 in 1994-95. His assist total (91) was fourth best by a Clemsonfreshman and best since 1990-91.