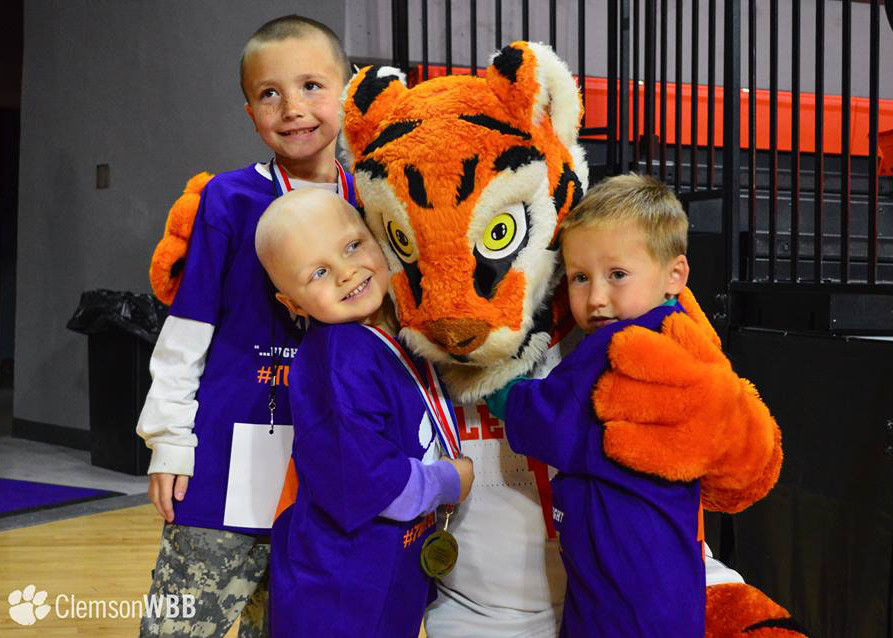 Fight, fight, fight. As simple as it may seem, that mantra embodies the very essence of what fuels the battle on the basketball court, as well as the battle against pediatric cancer. Adorning the special shirts commemorating the third-annual Pediatric Cancer Awareness Game that featured a Clemson Tigers victory over the Monmouth Hawks on Nov. 19, that noteworthy phrase served as far more than just a lyric from Clemson’s fight song.

The contest marked the third installment of Clemson women’s basketball’s annual Pediatric Cancer Awareness Game. Conducted in conjunction with nonprofit childhood cancer initiative Turn It Gold, the event has raised thousands of dollars thus far through donations at each of the three contests to support the fight against pediatric cancer, as all of the proceeds from the game are split between pediatric cancer funds Clement’s Kindness, Children’s Cancer Partners of the Carolinas and Chase After a Cure.

Inspired by the battle against neuroblastoma that her son Colt has taken on so bravely, director of operations for Clemson women’s basketball Kathy Becker spearheaded the formation of the annual event, hoping to raise both awareness and money to support a cause near and dear to her heart.

“For us, it’s a way to give back,” Becker shared when speaking on the inspiration behind the event. “We have received a lot of help from the foundations that have brought kids here to Littlejohn Coliseum, so it’s a way for us to give back and give the kids something special.”

While the game helps to bring in funds to support pediatric cancer awareness through selfless donations from attending fans, the contest also makes up just a small part of Clemson’s Turn It Gold initiative that Kathy and Clemson athletics graduate marketing assistant Jacob Nicely have instituted. Having raised nearly $1200 in proceeds from the Nov. 19 game, the Turn It Gold campaign has already been a major success.

“It’s great that these children can have a day where they can just be kids, and an experience where they’re not in the hospital getting treatments,” Nicely shared when discussing the meaningfulness behind the Pediatric Cancer Awareness Game. “They’re just having fun, and that’s what’s so special about it.”

With gold serving as the symbol of pediatric cancer awareness, the game’s halftime festivities fittingly included Colt bestowing gold medals for courage to two other brave boys afflicted by cancer. At four and a half, Colt has been around the Clemson program for the duration of his young life, with everyone making up the women’s basketball program standing in Colt’s corner throughout his hard-fought battle.

“It really touches our hearts,” Clemson point guard Danielle Edwards said when speaking after the special win on Sunday. “For this event to bring awareness about pediatric cancer, it really meant a lot to us to also get a win. To see how these kids fight every day, the least that we could do was fight on the court for them.”

Like Colt, eight-year-old Peyton Gessing and two-year-old Lucas Powell have dealt courageously with their cancer diagnoses. Both boys were honored for their bravery by receiving medals from Colt himself at half court on Sunday as the game’s honorary Courage Award recipients, which the ever-friendly Colt was delighted to take part in.

“It was unbelievable. He always knows how to turn it on when the lights are on,” Colt’s proud mom, Kathy, said with a smile when discussing his moment in the spotlight. “It was really special, and I’m glad that we were able to recognize other children who are going through this.”

As part of the Pediatric Cancer Awareness Game, local families affected by pediatric cancer are invited each year to take part, with VIP service and a postgame meet-and-greet autograph session with Clemson’s coaching staff and players serving as the highlights of the special event. Through their close bonds shared with Colt, Clemson’s coaches and players recognize and appreciate the impact that the annual contest holds, wearing their gold-emblazoned warm-up shirts with Colt’s name on the back with pride.

Perhaps inspired to earn a spectacular win on such a spectacular day, the Tigers pulled off an improbable comeback to earn a win over Monmouth, scoring eight points in the game’s final 20 seconds to earn a three-point victory. Perfectly epitomizing the spirit of never giving up and fighting through and through, Clemson’s win embodied the very essence of what standing in Colt’s corner is all about.

While the symbolism from the third-annual Pediatric Cancer Awareness Game was evident, from the conspicuous presence of the color gold and the gold medals distributed at halftime to the relentless effort displayed by the Clemson Tigers as they rallied for an incredible victory, the most important symbolism came in the form of the rally cry elicited from the warm-up shirts.

Graciously donned by players for both the Tigers and the Hawks, the shirts implied a very strong statement, as the befitting message of never ending the fight against pediatric cancer surrounds the gold ribbon that has come to serve as the calling card for that very fight. And although Colt, Peyton and Lucas may not realize it, they served as symbols on Nov. 19 themselves, as their very presence was proof positive of why taking on the fight against pediatric cancer is so worthwhile.

With the time of year in which we all grow thankful fully upon us now, it is important to keep the struggles of those facing less than desirable circumstances in mind. With that being said, the annual Pediatric Cancer Awareness Game does an excellent job of bringing one such struggle to the forefront, shining a light on just how similar the mindsets associated with undertaking a battle on the basketball court and undertaking a battle against cancer really are.

Through all of the nuanced initiatives, practices and methods involved with both, the overarching theme that conjoins both basketball and the journey to defeat and cure cancer is the never-ending fight for victory. And, as evidenced by the heroes honored at the matchup between the Clemson Tigers and the Monmouth Hawks on Nov. 19, those taking on the fight against pediatric cancer are warriors, no matter the age and no matter the size.

After all, willpower has no restrictions and can come in all shapes and sizes. The sole requirement for utilizing it is that one stays motivated and never relents, and Colt Becker and his compatriots have done just that, proving themselves to be champions of the highest regard by continuing to battle and continuing to overcome. By continuing to fight, fight, fight, no matter what.