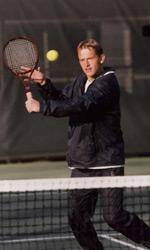 Los Angeles, CA – The fifth-ranked Southern California men’s tennis team defeated Clemson 4-2 on Tuesday night at Marks Tennis Stadium in Los Angeles, CA. With the loss, the Tigers slipped to 8-9 on the season.

Doubles competition was not played after Southern Cal won four out of the six singles matches and clinched the victory. Picking up two singles victories for the Tigers were Sander Koning and Jimmy Poole who won at the No. 4 and 6 positions respectively. With his victory, Koning improved his dual singles record to 11-3 on the year.

The Tigers will next be in action on Friday when they travel to Berkley to take on California.