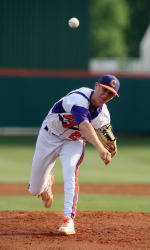 The Seminoles held a 2-0 lead until Felder’s solo homer in the fifth inning. Then in the sixth inning, Shaffer lined a solo homer to tie the score before Kieboom untied the score with a two-out, three-run homer later in the frame. Phil Pohl, who graduated on Friday, added a two-run double in the seventh inning for Clemson, who clinched a spot in the ACC Tournament with the win.

Daniel Gossett (6-2) earned the victory by tossing 4.0 scoreless innings. He allowed just two hits and five walks with three strikeouts. Starter Dominic Leone pitched 5.0 solid innings, yielding five hits, two runs, and three walks with five strikeouts. Leone and Gossett combined to limit Florida State to 1-for-12 with runners in scoring position and 0-for-8 with two outs. They also combined to allow only two of the Seminoles’ 19 baserunners to score, as Florida State stranded 14 runners on base.

Florida State starter Brandon Leibrandt (6-2) suffered the loss, as he gave up six hits, four runs, and one walk with six strikeouts in 5.2 innings pitched.

The Seminoles took the game’s first lead in the second inning. Justin Gonzalez reached on a bunt single with one out, stole second, and scored on Josh Delph’s single down the left-field line.

Devon Travis led off the top of the fifth inning with a single to center. Two batters later, Jayce Boyd grounded a one-out double down the left-field line to advance Travis to third. Stephen McGee followed with a sacrifice fly to right field to plate Travis.

Felder cut Florida State’s lead in half in the bottom of the fifth inning when he lined a solo home run to right field, his sixth long ball of the season.

Shaffer tied the score in the sixth inning when he lined a 1-2 pitch off the left-field foul pole for a solo home run, his 10th long ball of the season. Two batters later, Jay Baum flared a two-out double to left-center, then Jon McGibbon walked. Kieboom came through with a three-run homer, his third long ball of the year, off the glove of left-fielder Jose Brizuela to give Clemson a 5-2 lead.

In the seventh inning, Jason Stolz led off with a single through the left side and advanced to second on Steve Wilkerson’s sacrifice bunt. After Thomas Brittle walked and Shaffer flied out, Pohl belted a two-out double down the left-field line to score Stolz and Brittle.

In the ninth inning, James Ramsey led off with a single to left-center on a 1-2 pitch, then the next two Seminoles were retired. Pinch-hitter John Nogowski drew a two-out walk, but pinch-hitter John Holland flied out to center to end the game.

Pohl led the Tigers, who totaled nine hits, by going 2-for-4 with a double and two RBIs. Stolz added two hits and a run, while Kieboom had a game-high three RBIs on his three-run homer. The three home runs matched Clemson’s previous season high, which came against Winthrop on April 3. Five of the Tigers’ seven runs came on two-out hits as well.

Wilkerson went 1-for-3 to extend his hitting streak to 12 games, while Brittle’s 22-game hitting streak, tied for eighth-longest in school history, came to an end. Brittle was 0-for-3 with a run and walk.

Travis led the Seminoles’ seven-hit performance by going 2-for-5 with a run. Florida State batters combined for eight walks and three hit-by-pitches. Florida State also had a batter reach base in all nine innings, while at least two Seminoles reached base in eight of the nine innings.

Clemson and Florida State will play game-two of the three-game series on Sunday at 1:00 PM. The game was originally scheduled to start at 6:30 PM, but the threat of inclement weather forced the move. Sunday’s game will be available live via webcast at ESPN3. Sunday will also be “Senior Day” at Clemson, as six Tigers will be honored during pregame ceremonies.