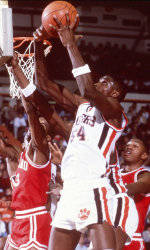 Twenty-eight years ago today (and I do mean today, Feb. 29), one of the great victories in Clemson basketball history was recorded in Durham, NC. Clemson has only won four times at Cameron Indoor Stadium, so any Tigers win in that facility qualifies.

Feb. 29, 1984 was a bizarre day on many counts, as you will see by the description to follow. But, it was glorious for the Tigers because they not only beat Duke in Cameron Indoor Stadium, but they beat a Duke team coached by the winningest coach in NCAA history, Mike Krzyzewski, that was ranked 15th in the nation entering the contest. It was a Duke team that would beat the number-one ranked Tar Heels of North Carolina and Michael Jordan just 10 days later in the ACC Championship game.

And, Clemson won this game by the closest of margins, 77-76, in a season in which Bill Foster’s Tigers had suffered many heart-breaking defeats. There was a 74-73 loss to a Virginia team that would go to the Final Four. The Tigers lost in triple overtime to Len Bias and the Maryland Terps, and there was a 76-72 overtime loss to Wake Forest. All three of those games were at home.

Duke had had an unusual season as well. This was Coach K’s first outstanding team. After going 38-47 for his first three years combined, he signed freshman guard Tommy Amaker to run the show and he had a major impact. His Blue Devils were close to a lock for the NCAA Tournament with a 22-6 record when Clemson came to Duke for the Blue Devils Senior Day.

What was really strange about this Blue Devil team was that they were much better on the road than at home. They finished the year with a 7-7 conference record, but they were 5-2 on the road and 2-5 at home. They would lose their final two home games that year to Georgia Tech and Clemson, who both had 18-game ACC road losing streaks entering Cameron.

I have no idea how the pregame line stood, but it had to be 15 or more points because the Tigers travelled without Murray Jarman, Clemson’s second leading scorer entering the game with a 14.5 average. Jarman had suffered a knee injury in a collision with Sam Perkins in the previous game and he could hardly walk. (He would later score 28 against Perkins in the ACC Tournament, but he was not available this Feb. 29 day.)

Foster started little used sophomore Glen McCants at center, but he knew he would play a 6-9 freshman named Horace Grant more minutes. Grant had had flashes of brilliance as a rookie in the 1983-84 season, but he was still a little raw. This night was a foreshadowing of what was to come for Grant.

There was renewed interest in Duke basketball because the Blue Devils were on the bubble for the NCAAs. They had not been to the Big Dance since 1980 when Clemson also reached the Elite Eight. The sellout crowd was rocking and expecting to blitz a Clemson team that had lost 11 straight conference games.

Duke jumped out to an 8-0 lead in the first five minutes as Clemson started 0-8 from the field. Then Foster put Grant in the game and he had a big impact. He scored eight points, had four rebounds, two assists and a blocked shot over the last 12 minutes and Clemson had a 44-37 lead at intermission. Marc Campbell also scored eight off the bench, and Anthony Jenkins, who averaged close to 20 points a game for his career against the Blue Devils, added eight.

Meanwhile, Mark Alarie was keeping Duke in the game with 18 of their 37 points.

McCants got a third foul early in the second half and when Grant came back in the Tigers led by just three. But, he hit a jump shot to put Clemson up five, then Jenkins had a dunk to put the Tigers up 10.

With six minutes left Clemson had a 75-60 lead. Yes in Cameron Indoor Stadium against a top 15 team on Senior Night.

But, Duke was not finished. Johnny Dawkins, who would go on to become the school’s all-time leading scorer and lead Duke to the 1986 NCAA Championship game, started penetrating Clemson’s defense hitting shots and drawing fouls. Duke scored 10 points in a row and it was 75-70 with 3:06 left.

Raymond Jones made a foul shot with 2:59 left to make it 76-70. But, Duke kept coming as Clemson clanged free throws. The Tigers were just 2-9 from the line inside the last 3:21, including three missed on the front end of one-and-one’s by Hamilton, a career 75 percent shooter.

Can you say bizarre!

Mike Eppley, who only played the last two minutes of this game and had not played in six games, made 1-2 from the line with 1:23 left to give Clemson a 77-74 lead. Dawkins then made two free throws on the other end on Grant’s fifth foul. Clemson missed the front end of three consecutive one-and-one situations in the last minute, but Duke could not score at the other end. In those days there was no double bonus so everything was a one-and-one after the sixth foul.

Duke had the ball after another missed one-and-one with 14 seconds left. Dawkins had just fouled out so Coach K had to work a play for someone else. Danny Meagher, who did not make a field goal the entire night, missed, but he got the rebound and passed to Amaker who had an open shot from the right wing. His shot missed and Alarie had a tip, but it missed and the horn sounded, giving Clemson a 77-76 win.

It was just the third time Clemson had gained victory in Cameron and all had come under Bill Foster’s. Jenkins ended with 20 points on 9-13 shooting, while Grant had 16 off the bench. He had a perfect game in many respects, as he was 6-6 from the field, 4-4 from the line and had four assists without a turnover. It was the first of many incredible performances for Horace Grant.

Marc Campbell, who played in our Alumni game on Feb. 24, scored 10 points off the bench and added six assists without a turnover. Hamilton was held to 10 points, but he played the full 40 minutes chasing Dawkins, who he held to 8-18 shooting.

Alarie scored 29 and had 16 rebounds for Duke. Amaker and Dawkins, now head basketball coaches at Harvard and Stanford, respectively, combined for 30 points and nine assists. Current ESPN commentator Jay Bilas (I love you Jay, but) had just two points and was 0-5 from the foul line.

Clemson shot 60.8 percent from the field, even after the 0-8 start, still the program’s best shooting performance in Cameron Indoor Stadium. That included 13-20 in the second half.

My postgame interview with Coach Foster on the Clemson Radio Network was bizarre in itself. After the game I went to the floor (we still have broadcast position high above courtside at Duke) for the interview and he was mad as a hornet because we had nearly blown that 15-point lead and the game was so close.

Here we had recorded just the third win in Clemson history over Duke, beat a top 15 team on the road, shot 61 percent, and he was upset.

That would be Bill Foster’s last win over an ACC team. The Tigers beat Campbell on Senior Day the following Saturday, then lost to number-one ranked North Carolina in the first round of the ACC Tournament on March 10 in Greensboro. A week later Coach Foster left Clemson to restart the basketball program at Miami (FL). He felt he had done all he could do at Clemson.

And, he did a lot. He took over a program that was shackled by three years of NCAA probation and shook the bushes to bring in low rated players and made them into something. He brought Clemson to its first NCAA Tournament appearance (1980) that ended one step from the Final Four.

And one of his great accomplishments took place on this day 28 years ago today. It is a shame he just didn’t appreciate it at the time.