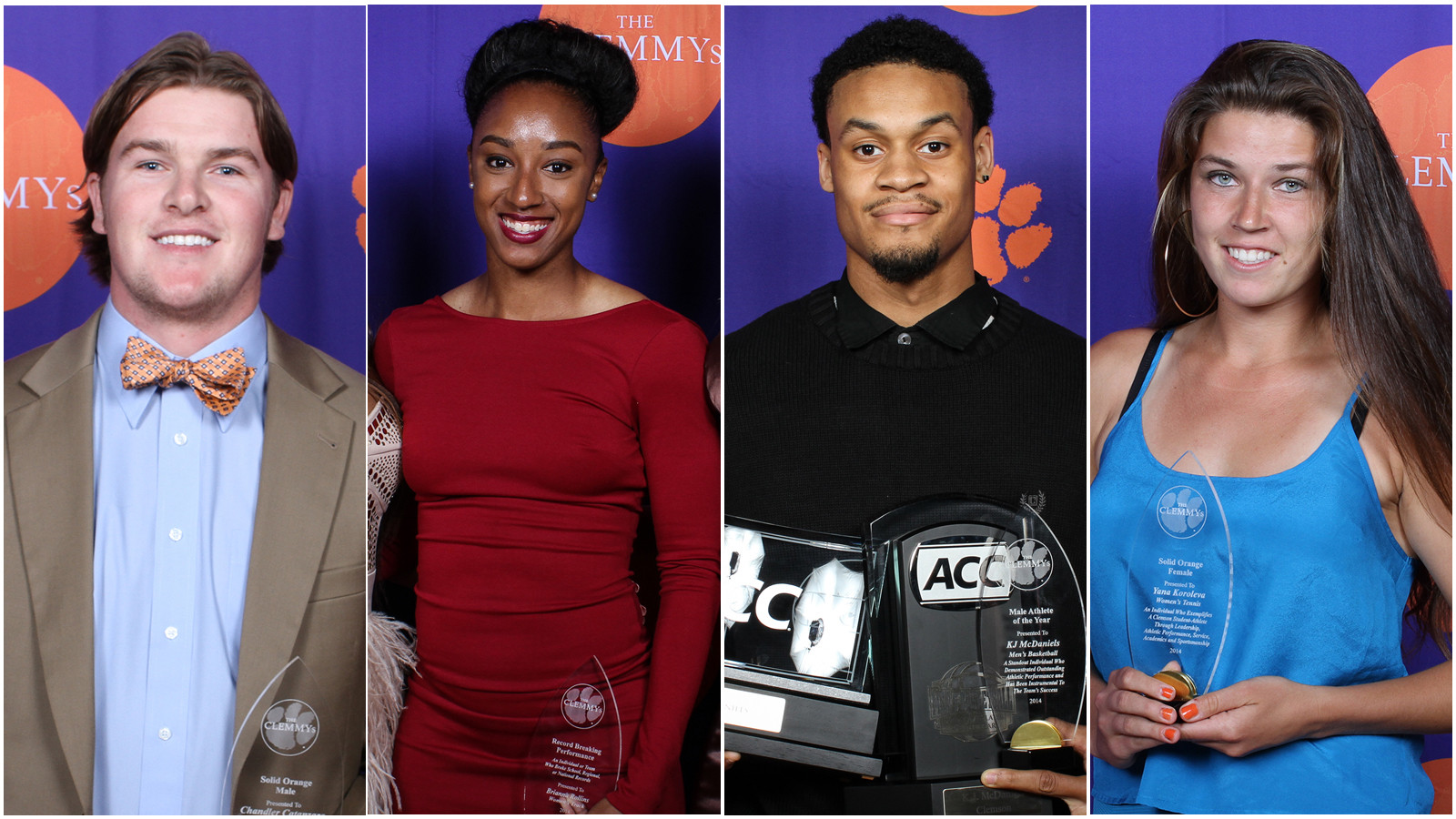 CLEMSON, S.C. – Brianna Rollins has become one of the emerging superstars on track’s world stage since she left Clemson to embark on a pro career, but that doesn’t mean she ever actually left.

The world champion in the 100-meter hurdles still trains in Clemson, which made it awfully easy to return Monday night to accept her Female Athlete of the Year award at the second annual CLEMMYs at Littlejohn Coliseum.

“It’s great to be recognized for all the accomplishments I had last year,” Rollins said. “I still stay here in Clemson, so I wasn’t far away. So when I got invited, of course I wanted to come.”

Rollins became Clemson’s first winner of the Bowerman Award – the highest honor awarded in collegiate track and field – after she put together a season for the record books in 2013. She was the NCAA champion in both the 60- and 100-meter hurdles and set collegiate records in both events.

Rollins elected to turn professional with one outdoor season of eligibility remaining and two weeks later broke the American record by running 12.26 on her way to the 2013 USA Championship. Rollins made the World Championship team and became the youngest female in history to win the world title in the 100 hurdles.

“It’s a little overwhelming at first, but you just have to take it in,” Rollins said. “All the attention and recognition comes with being a great athlete, so I just take each accomplishment in its own time and thank God for everything he’s blessed me with.”

The CLEMMYs is Clemson Athletics’ All-Sports Awards Night, created to celebrate the highest achievements in both athletics and academics.

On the men’s side, junior K.J. McDaniels was named the Athlete of the Year after he became the first ACC Defensive Player of the Year in school history and just the 12th first-team All-ACC selection in program history after he was the only player in the country leading his team in scoring, rebounding, three-pointers, blocks and steals.

McDaniels was presented with those trophies, too, when he took the stage to accept his CLEMMY.

“It feels good,” McDaniels said. “I’m happy, and I’m going to try to get some more.”

One of the night’s other major honors went to one of McDaniels’ teammates, Jaron Blossomgame, who received the Determined Spirit Award.

Blossomgame started 30 of 36 games for the Tigers this season and averaged 4.9 points and 5.0 rebounds after sitting out his freshman season due to a broken leg suffered in April as a senior in high school.

Even after the initial injury kept him out for a year, he underwent a second surgery on the leg in June to accelerate the healing process that put him out of commission for another three months.

While most everyone in the arena probably pegged Blossomgame as the winner, he said he was actually taken by surprise until he saw director of basketball operations Dick Bender was the one presenting the award.

“It means a lot to me that everybody recognized my hard work in coming back,” he said. “I’ve been out here working hard, so it feels good to be rewarded for it.”

Blossomgame also suffered a hairline fracture in the same leg late in the season, but said the healing is “coming along well” and he is just focused on improving his game in the offseason.

The first award handed out at the gala was for Male and Female Rookie of the Year, and the winners were sophomore pitcher Matthew Crownover and freshman goalkeeper Kailen Sheridan.

Crownover was named a Freshman All-American by Collegiate Baseball after he had a 7-3 record and a team-best 2.19 ERA in 15 appearances in 2013.

Sheridan was named to the ACC All-Freshman Team and All-ACC Third Team after starting all 19 games in goal for the Tigers last season and allowing just 18 goals.

The Clemson football team’s Orange Bowl win over Ohio State – the first BCS bowl win in school history – garnered awards for Competition of the Year and Moment of the Year.

With the latter award being designated an individual award, the trophy went to the game’s Most Outstanding Player, receiver Sammy Watkins, who had 16 receptions for 227 yards and two scores in the Tigers’ 40-35 win over sixth-ranked Ohio State.

“It was a great stepping stone for our program,” defensive tackle Grady Jarrett said. “We’ve got bigger goals this year. We’re trying to bring the national championship back to Clemson, and we’re looking to get more.”

The night’s final awards, the Solid Orange Male and Female awards, for the athletes who exemplify what it means to be a student-athlete at Clemson, went to football kicker Chandler Catanzaro and senior tennis standout Yana Koroleva.

“I’m in college to experience different things – to do well in academics, to try to do volunteering and community service and get involved – and not just spend my time on the court all day,” Koroleva said. “So that’s what I try to do: just try to be the best in all different areas. And that makes the college experience more fun.”

And that pretty much sums up what the CLEMMYs are all about.