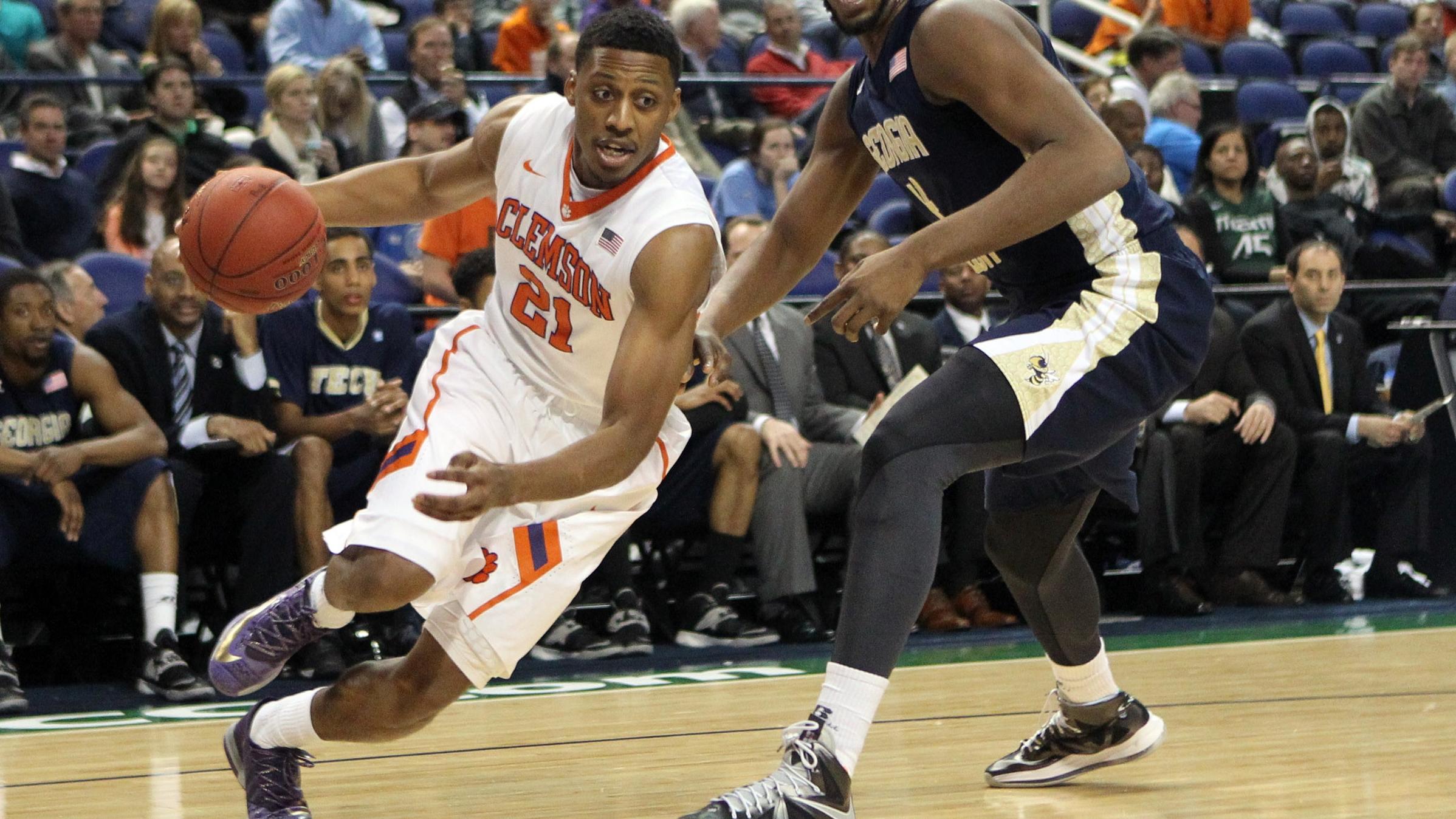 FEATURE: Tigers ?survive and advance’ in overtime thriller with Tech

GREENSBORO, N.C. – It’s often said about this time each year that it’s hard to beat the same team three times in a season. And that was certainly the case for Clemson on Thursday night.

After sweeping the regular-season series with Georgia Tech, the Tigers trailed by as many as nine points in the second half, but battled back down the stretch and went on to win 69-65 in overtime late Thursday night to pull the trifecta over the Yellow Jackets.

“It feels good because all we want to do is survive and advance,” junior two-guard Damarcus Harrison said. “That’s a big thing for us, just live to play another day and keep our dreams alive.”

After Clemson (20-11) used a furious 15-2 run to take a four-point lead with 1:27 to go, the Yellow Jackets scored the final four points of regulation to force overtime on a fallaway jumper by center Daniel Miller with 0.9 seconds left on the clock.

Tech took the first lead of overtime on a basket by Marcus Georges-Hunt on the first possession of the extra period, but K.J. McDaniels evened things up with a jumper on the other end.

Trae Golden’s three-point play put Tech ahead by three, 60-57, but Clemson rallied to tie the game again on a pair of foul shots by McDaniels.

Golden knocked down a long two-pointer to put the Yellow Jackets back on top once again, but Clemson pulled within one on a foul shot by Jaron Blossomgame and then took its first lead of the extra stanza on a layup in transition by Harrison.

Tech had the ball, down a point, with a chance to take the lead, but Harrison drew an offensive foul on a Yellow Jacket ball screen.

“They just told me to deny the ball, and I was trying to deny, and (Corey Heyward) just ran me over,” Harrison said. “That’s pretty much all there was. He just ran me over. He’s a pretty big dude.”

From there, Clemson made six straight foul shots down the stretch to close out the win.

McDaniels led the way with 18 points, while Harrison and Rod Hall joined him in double figures with 12 and 10, respectively.

For the Tigers, it was a thrilling victory after they had lost an equally heartbreaking game in overtime to Pittsburgh in the regular-season finale.

“The Pitt loss was brutal in a lot of ways,” Head Coach Brad Brownell said. “But to be honest, we just moved past it. We had a meeting on Sunday where we just said the regular season was over. It was the start of a new season, and we needed to play our best basketball now.”

Clemson earned its fourth straight regular-season sweep of Georgia Tech, with a 45-41 win at home and 63-55 triumph in Atlanta, and it pulled the trick a third time at the Greensboro Coliseum for its first win in four tries against the Yellow Jackets in the ACC Tournament.

“It’s really difficult (to beat a team three times) because they work on what they messed up on in the first two games and kind of scout us like we scout them,” Hall said. “It just gets tougher, and you just have to face adversity and make the best of it.”

There was certainly a point in the contest when the Tigers would have considered themselves lucky to be playing in overtime. There was also a point where they felt very unlucky about it.

Robert Carter Jr. beat the buzzer with a three-pointer just before halftime to put the Yellow Jackets on top at the midway point, and they made their first three three-point attempts of the second half to seize control.

Georgia Tech led by five, 40-35, after Georges-Hunt and Heyward hit threes on consecutive trips as part of a 10-3 run. Those two shots gave Tech four straight makes from three-point range after opening the game 1-for-9 from long distance.

Trae Golden’s double-pump layup stretched the Jackets’ lead to six for the first time in the game, and Carter Jr. extended it to eight with a jumper with 12:18 left.

But Landry Nnoko came up with a big swat on defense, and Hall helped the Tigers even the momentum with a badly needed three-pointer of his own to make it 44-39.

“I had to step it up because I didn’t want to lose the game and just make it a one-game trip,” Hall said. “I just had to do what I had to do to help us win.”

Tech led by as many as nine, but the Tigers never wavered. Hall drove hard down the lane and soared to the basket to pull Clemson within five with 6:45 to go, and Harrison’s three on the next trip made it a two-point game, 49-47.

The Tigers tied the game with two foul shots by Blossomgame with 4:15 left, and the redshirt freshman’s putback on the next trip down put the Tigers ahead for the first time since Carter Jr.’s three-pointer at the halftime buzzer put Georgia Tech ahead going into the locker room.

“I just had to figure out a way to help us out,” Blossomgame said. “Guys were getting down, the crowd was kind of quiet. The guys look at me as an energy guy, so I had to find a way to provide that – offensive rebounds, tip-in shots, big rebounds – so I just had to get our team rolling.”

Clemson will be back in action in the tourney quarterfinals at 9 p.m. Friday against No. 3 seed Duke, which the Tigers beat during the regular season, 72-59 at Littlejohn Coliseum.

“It’s exciting,” Harrison said. “We get another chance to play them again. It’s going to be a good game because we beat them earlier this year and I know they’re going to be ready for us. We’ve just got to come out and play as hard as we can.”