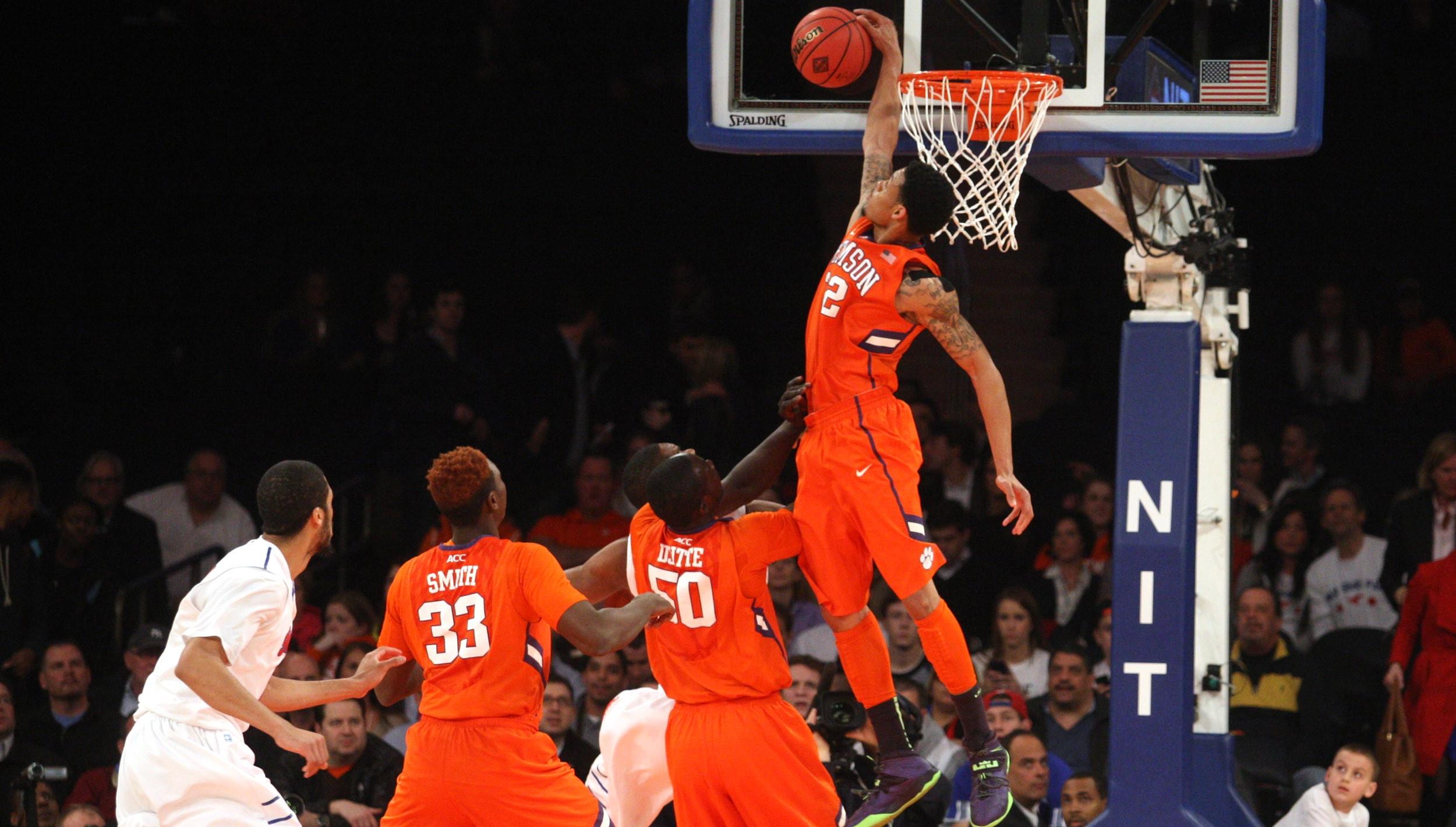 NEW YORK – Tuesday night’s season-ending loss to SMU was a tale of two halves for Clemson, and in many ways, also told the tale of the Tigers’ season.

After the 65-59 defeat, Brad Brownell said it showcased equal parts the things that allowed his team to rise from being picked near the bottom of the ACC into the NIT semifinals and also the things they will need to do better if they hope to play on an even bigger stage next year.

“Tonight you saw the good and the bad of Clemson basketball for this year,” he said. “The first half, we played as good as we can play. Offensively, we shot the ball at a high level. I thought we guarded them very well.

“The problem for our team is we’re not consistently good enough offensively to match that sometimes, and in the second half you saw the team that sometimes reared its ugly head and we lose some games in that light.”

Clemson (23-13) led from the game’s opening possession when Rod Hall drained a three-pointer 18 seconds into the action and built that lead to as many as 12 going into the locker room after Damarcus Harrison made a three just before the buzzer.

Clemson’s three starting guards didn’t miss a shot in the first half – from anywhere – as Hall, Jordan Roper and Harrison combined to go 9-for-9 from the field, 5-for-5 from three and 3-for-3 from the foul line before halftime.

The Tigers continued their hot shooting early in the second half, as they were 7-for-10 from three-point range after K.J. McDaniels stretched the lead to 13 with a long ball just after halftime.

But after McDaniels’ three-pointer gave them their largest lead, the Tigers made just one of their final 10 attempts from long range and saw their lead slip away, as SMU went on a 19-6 run and eventually pulled out the win down the stretch by shooting 59.1 percent from the field in the second half.

“We really played about as well as we could play,” Brownell said. “We didn’t get off to a good start in the second half, and unfortunately we saw the second side of our team We struggle offensively at times, and we just didn’t shoot the ball very well in the second half.”

Hall led the Tigers with 18 points, and McDaniels added 11, to go along with seven rebounds, three assists and three blocks.

Afterward, the team’s only two two-year veterans took the podium next to Brownell at the postgame news conference, and their head coach lauded them for leading the team to a 10-win improvement over the previous season’s finish – from 13 wins a year ago to 23 this season.

“I couldn’t be more proud of these two guys next to me,” Brownell said and nodded toward Hall and McDaniels. “They are tremendous leaders, tremendous young men who had outstanding seasons and really helped will this team to a surprisingly strong finish in our league and within a couple baskets from playing for an NIT title.”

The Tigers were picked to finish 14th in the ACC in the preseason, but ended up in sixth place and only a couple controversial endings away from having a legitimate shot at making the NCAA Tournament.

But while they became very good at proving their doubters wrong, Hall said he felt the team needed to get better at being frontrunners – in this case, playing with a big lead in a big game.

Still, there was no denying the strides the Tigers made during the season, especially the stretch run, when they pushed Duke to the brink in the ACC Tournament and then won three hotly contested games in the NIT to punch their ticket to Madison Square Garden.

“It’s been a great run for us, especially for a young team like ourselves,” McDaniels said. “I think we’ve grown a lot this year, especially starting with our Italy trip. That helped us out a lot. I’m proud of my guys for what we have done and what we have accomplished, so moving forward, we’ll just get better and improve every day.

“Our coaches stayed in there and grinded with us every day and got us to this point, and my teammates grinded every day, too. We love each other, and we’re there for each other. You win some, you lose some, but you just have to keep grinding.”

While the team was able to earn itself a trip to New York City, it ultimately came up short of the offensive firepower it needed to extend the trip – and its season – by one more game.

But even in the wake of seeing a 13-point second-half lead slip away, Brownell was able to reflect positively on the journey his team had just completed.

“We have some young men in our program – Rod Hall, Landry Nnoko and certainly K.J. McDaniels – who have made huge strides this season,” he said. “Now if you’re going to make the next step, you need more guys to be great players. Certainly K.J. was that this year. We just need a little more consistency from a few more guys.

“The good news for us is we have all young players. This is a process. It’s a tough process, but the experience of the last two weeks has really helped us. I think we’ve rejuvenated the fan base a little bit, and I’m very excited with where we’re going.”