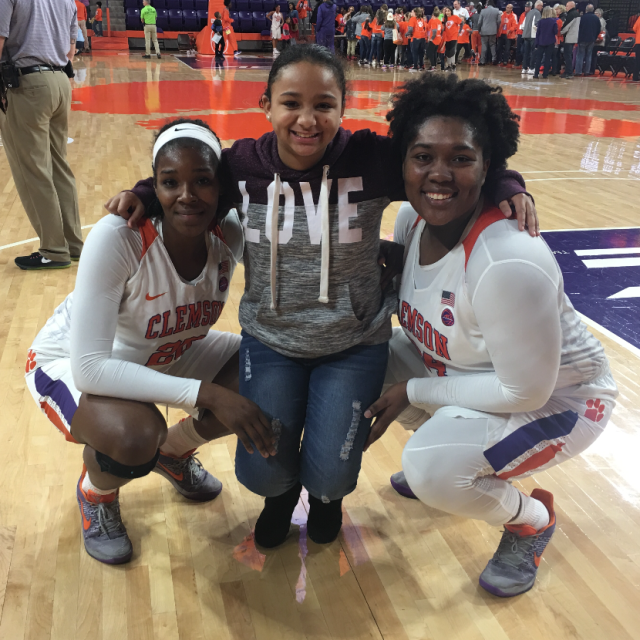 FEATURE: Tigers Making a Major Impact in the Clemson Community

One team. One heartbeat. That mantra of unity has been the driving force for the Clemson women’s basketball team, and has extended well beyond the basketball court throughout Audra Smith’s tenure as head coach. The Tigers have touched multitudinous lives of those in Clemson’s extended family, engaging in numerous service ventures as part of the program’s embracing of the community.

“It puts everything in perspective as it relates to what we do and proves that it’s so much more than basketball,” Smith said when speaking on her team’s commitment to community service. “Giving back to the community brings us so much joy.”

This season, Clemson has been particularly active, with the players touching lives through a variety of community outreach programs and activities. Always willing to cape for valiant causes, the Tigers incorporated community outreach into several home contests this season. Hosting games in recognition of noble causes, such as pediatric cancer awareness, National Girls and Women in Sports Day, Samaritan’s Feet and the Kay Yow Cancer Fund, Clemson’s home schedule encompassed a variety of charitable efforts that Coach Smith and her team are passionate about.

That passion translated to a dedicated season of altruism, with community involvement serving as one of the primary headlines for the Tigers this year. Featuring a roster of caring, selfless ambassadors for the goodwill associated with the game of basketball, the team made an impact upon the Clemson extended family in a variety of ways this season.

More than just a run-of-the-mill team-building exercise, this season, the Tigers have participate in a local Habitat for Humanity build. Taking part in the razing of a unique “athlete house” that effectively symbolizes the widespread impact that Clemson Athletics has had upon the community, the women’s basketball players came together as part of an incredibly fulfilling experience.

Spending an afternoon working side by side at the construction site, the ladies sacrificed time and energy for the betterment of the community. For many of the Clemson hoopers, the experience was the first of its kind, and the excitement brought on by their first Habitat for Humanity build proved to be both fun and fulfilling.

The Tigers also carried forth with the signature community event for Clemson basketball this season by taking part in Tiger Wonderland. A special occasion that has been a fixture for Clemson basketball for over a decade now, Tiger Wonderland is organized through the efforts of Clemson Athletics and Clemson Community Care. A holiday-themed celebration for local children with ties to Clemson University’s extended family, the event is special for all involved.

“The players feel privileged to take part in it and be able to give back,” Smith shared at the 2017 Tiger Wonderland event in December. “And they’ll always remember the experiences that they’ve had because of it.”

Both the Clemson men’s and women’s basketball teams partake, with each player being paired up with a child participating in the Tiger Wonderland festivities. The event includes dinner, arts and crafts-related activities and a gift exchange, which always proves to be the highlight of the night for the children who receive presents, as well as the players who distribute them.

“Tiger Wonderland is my favorite event, and I look forward to it every year,” senior forward Ivy Atkism said with a smile when discussing her love for the Clemson basketball tradition. “Just being able to put a smile on kids’ faces means the world to me.”

Passionate about youth engagement, Atkism and fellow Clemson forward Sirah Diarra, who is a junior, have taken it upon themselves to become pillars in the local community by providing guidance and tutelage to young girls. Serving as mentors to a group of girls at Ravenel Elementary School in Seneca, Atkism and Diarra have developed tight relationships with the young ladies, regularly meeting with them at lunch and recess to chat, offer life advice and discuss anything that the girls have questions about, from their personal lives to academics and everything in between.

“It just shows these girls that we’re on their side,” Atkism shared when explaining the impact of the mentorship work that she has been a part of. “They can look up to us, and we’ll be here if they need anything. The same way that they support us in basketball, we support them in all that they do.”

An overarching theme of compassion and consideration emanates from the Clemson women’s basketball program.

“Our program does a great job of giving back through community service,” offered Diarra as she spoke on her team’s commitment to making an impact in the Clemson community, “and it’s something that we’re all proud of.”

Serving as role models to local children, the Clemson players have taken it upon themselves to make an impact through their actions. It has become a regular occurrence after Clemson home games for young fans to form large lines as part of the player autograph-signing sessions that take place following each contest, symbolizing just how much of an impact the Tigers have made and continue to make.

Yes, Clemson has indeed made a mark throughout the local community, touching the lives of many, regardless of age. Taking the time to visit retirees at retirement community Clemson Downs earlier this season and fraternizing with the families of those affected by pediatric cancer following the Pediatric Cancer Awareness Game in November, the level of support and kindness that the Tigers have expressed toward those who so kindly support them on the basketball court is inspiring and admirable.

Fully appreciative of the opportunities presented by the game of college basketball, Clemson’s players have carried themselves with dignity and class, choosing to commit to the idea of giving back and never wavering from it.

While the characteristics of a quality basketball program are rather open-ended, one is for certain; it must have heart. And there is definitely no shortage of heart with regard to the Clemson Tigers. Going above and beyond, the Tigers have served their community in a multitude of capacities this year, setting a new standard that will likely continue to be expanded upon for years to come.